CBS CEO Takes A Shot At TODAY Show Troubles: ‘Drama Belongs In Primetime,’ Not In The Morning

CBS CEO Takes A Shot At TODAY Show Troubles: ‘Drama Belongs In Primetime,’ Not In The Morning 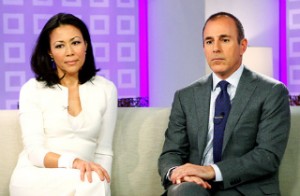 The big five networks have all gathered in New York this week for their upfront presentations, talking up their programming and announcing new shows for the fall. Today was CBS’ turn, and amidst touting its news division and new shows, CEO Les Moonves took a shot at rival network NBC for its well-publicized morning show kerfuffle. Moonves said that network drama should be saved for primetime, not between the hosts of the TODAY Show.

CBS replaced its long-running morning program The Early Show last year with CBS This Morning, co-hosted by Charlie Rose, Norah O’Donnell, and Gayle King. The network’s new morning show has largely avoided the same kind of controversy as its NBC rival, which has had to contend with behind-the-scenes sniping over the departure of Ann Curry and the feelings of some toward Matt Lauer.

According to TVNewser, Les Moonves didn’t hesitate to fire away at NBC over the negative press.

“We believe that great drama belongs in primetime between 8-11 PM, not at 7 in the morning.”

CBS late night host David Letterman had some fun with the Lauer’s woes in March, and the fracas that ended with Curry leaving her hosting perch resulted in lower viewership numbers for the once-undisputed king of the morning. For his part, Lauer has repeatedly gone to the media to defend himself after the publication of a damning exposé in New York Magazine.

Moonves today also took the opportunity to respond to ABC’s Jimmy Kimmel joking at ABC’s upfront about CBS being “smug motherfuckers” for their first place slot, embracing the label as he declared that the network is “the center of the universe.”