CBS Choice of Dickerson over Norah O’Donnell to Replace Schieffer is Painfully Wrong; Here’s Why 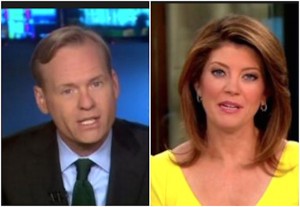 We hear lots of talk lately about the incestuous relationship between the press and politicos. In the case of the Obama Administration, 30 former journalists now work for Mr. Obama, thus proving the line between media and the politicians they cover has been blurred beyond recognition.

This phenomenon isn’t relegated to Team Obama, of course. Tony Snow went on to work at CNN after leaving the Bush 43 White House (after coming from Fox to serve as press secretary). Robert Gibbs signed with MSNBC as a contributor upon retiring as WHPS in 2011. Same goes for Ari Fleischer (Bush 43 to CNN), Dana Perino (Bush 43 to Fox) and Jay Carney (Obama to CNN). Ultimately however, all of the aforementioned don’t/didn’t have any real say on editorial decisions (outside of their own opinions on the air), so that aspect of the revolving door isn’t anything to be too concerned with.

But when we get to the big corner offices at major media outlets is where real potential conflicts of interest can be found. The list includes the following connection: David Rhodes–CBS News President–is the older brother of Ben Rhodes, Assistant to the President and Deputy National Security Adviser. And it’s this connection that makes David Rhodes’ selection of John Dickerson as Bob Schieffer‘s replacement following the 78-year-old’s retirement as host of the top-rated Sunday morning talk show right now (Face the Nation) a rather curious one.

From a performance perspective, Dickerson is affable but hopelessly average. His interviewing style will never be confused with a Tim Russert, George Stephanopoulos or Chris Wallace, and therefore allows the subject to mostly control the conversation and message. More importantly, at least with Schieffer, the audience at home–liberals, conservatives, independents–mostly felt he wasn’t picking a side or was anything resembling an ideologue (which may explain why he’s always chosen to moderate presidential debates in each of the last three elections). And by not alienating any portion of the audience, Face the Nation was able to quietly win the Sunday morning talk show war with relative ease. In short, Schieffer was trusted. Being with CBS for 46 years with very few bruises to show for it is how that trust is earned…

Which brings us back to Dickerson and the potential for him to alienate the large audience he’s inheriting. Is he an ideologue? Well, it’s hard not to escape this controversial piece he wrote for Slate that caused some major ripples at the time:

Go for the Throat! Why if he wants to transform American politics, Obama must declare war on the Republican Party

The exclamation point is a nice touch, dontcha thnk?

Money quote: Obama’s only remaining option is to pulverize. Whether he succeeds in passing legislation or not, given his ambitions, his goal should be to delegitimize his opponents.

Now…before defending this rhetoric as relatively tame compared to what we read on left and right blogs and hear on cable news every day, please remember this is coming from the political director of CBS News. With that job comes great power and a certain responsibility to at least try to appear objective. Instead, readers are treated to partisan points that include “pulverize,” “destroy,” and “go for the throat”.

Note: Before the Dickerson announcement (which came sooner than expected), the piece here today was going to focus on advocating Norah O’Donnell for Schieffer’s seat. The challenge, of course, would be asking O’Donnell to work six days a week (including getting up at 3:00 AM on weekdays to co-host the underrated CBS This Morning), but perhaps giving her Friday or Monday off from the morning show could have been a possible solution for the wife and mother of three. Ultimately, O’Donnell is an excellent interviewer and Emmy winner, knows the political scene inside and out going back to her days at MSNBC/NBC, and possesses the same kind of objectivity gene Schieffer does.

So why did Rhodes go with Dickerson? It’s certainly not because of talent or audience trust. Remember, this is the same David Rhodes who helped make life very uncomfortable for Sharyl Attkisson at CBS–a decorated investigative reporter who has won awards taking it Republican and Democratic administrations alike. So uncomfortable, in fact, that she resigned after nearly two decades after one-too-many stories by Attkisson critical to the administration on Benghazi (which Ben Rhodes played a key role in via changing talking points).

We hear about the conflict of interest between media and those in politics all the time.

Some of it is just part of the business, no big deal.

But it’s now impossible to ignore the decisions being made by the president of CBS News lately…especially given the influence his brother has inside 1600 Pennsylvania Avenue.