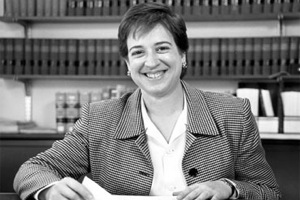 In what feels like a very long time ago, Supreme Court nominee Elena Kagan frustrated the media with her incredibly short paper trail, leaving the curious to peruse her college thesis and read too deeply into the events of her bat mitzvah. Finally, it seems that someone has uncovered something of legal substance. CBS News has found legal memos from her time as Justice Thurgood Marshall‘s law clerk that show her sympathetic to abortion and desegregation, and having sympathies towards alternative marriages.

The main takeaway from CBS’s investigation seems to be that Kagan has liberal sympathies, sympathies she made clear during her time working with an increasingly conservative court:

The documents, buried in Marshall’s papers in the Library of Congress, show Kagan standing shoulder-to-shoulder with the liberal left, at a time when the Rehnquist Supreme Court was moving to the conservative right. […]

On abortion, Kagan wrote a memo in a case involving a prisoner who wanted the state to pay for her to have the procedure. Kagan expressed concern to Marshall that the conservative-leaning Court would use the case to rule against the woman–and possibly undo precedents protecting a woman’s right to abortion. “This case is likely to become the vehicle that this court uses to create some very bad law on abortion and/or prisoners’ rights,” she wrote in the 1988 memo.

She also expressed strong liberal views in a desegregation case. Summarizing a challenge to a voluntary school desegregation program, Kagan called the program “amazingly sensible.” She told Marshall that state court decisions that upheld the plan recognized the “good sense and fair-mindedness” of local efforts.

Her opinion on marriage, which CBS indicates is favorable to “the constitutional underpinnings for recognizing gay marriage,” are a little more nebulous. She supports the recognition of a marriage-by-proxy conducted in Kansas by authorities in New York, where such marriages are illegal. The marriage was done by proxy because the groom was a prisoner.

Hopefully CBS will be able to release all the documents they uncovered in their research at the Library of Congress– if the memos are what CBS promises they are, there could be a lot of useful information on what Kagan’s beliefs were in the late ’80s, which is far more information that the media has had on Kagan in the past.