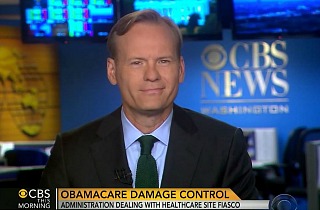 CBS News Political Director John Dickerson told the hosts of CBS This Morning on Monday that President Barack Obama’s administration could be heading toward a “credibility death spiral” if the problems associated with the Affordable Care Act persist.

Norah O’Donnell previewed Obama’s speech on Monday when he is expected to address the ACA’s “glitches.” She asked why the president was shifting tone from being dismissive of the problems in the health care reform law to displaying concern about them.

“Because it’s far worse than a glitch,” Dickerson said. “It’s been a total Fiasco, as Senator [John] McCain said.”

“The problem here is that the administration to get into, sort of, a credibility depth spiral,” he continued. “There have always been charges from the right that the president’s health care promises didn’t turn out to be true. But then some of those charges turned out to have some merit.”

He listed a variety of problems with the program that are frustrating people. “The problem is that it’s one false promise after another, and that could be a big, big problem,” Dickerson said.

Furthermore, Dickerson added, the website’s issues could endanger the program’s success if they prevent young people from signing up for insurance or if the duplicate information insurers are reporting they are receiving from the exchanges persists.