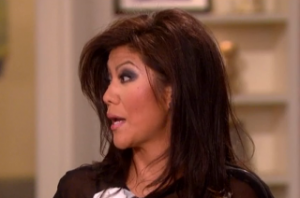 The Talk co-host Julie Chen made a stunning revelation this week about an operation that may have helped her break into the on-air news reporting business. Chen told her co-hosts that, at the urging of a former agent, she underwent plastic surgery to make her “Asian eyes” bigger.

Chen recounted the story about her experience as a local news reporter in Ohio. When she asked if she could fill in as anchor, her news director told her, “‘You will never be on this anchor desk, because you’re Chinese.’ He said ‘Let’s face it Julie, how relatable are you to our community? How big of an Asian community do we have in Dayton? On top of that because of your Asian eyes, I’ve noticed that when you’re on camera, you look disinterested and bored.’”

She said eventually decided she couldn’t work for that man anymore, and sought out a “big time agent” for career advice, who “basically told me the same thing.” He said, “‘I cannot represent you unless you get plastic surgery to make your eyes looks bigger.'”

At that point, Chen showed the audience side-by-side photos of what she looked like before and after the procedure. She said it took about a year to heal, but after she had it done, “the ball did begin to roll for me.” At the same time, she added, she wonders, “Did I give in to the man and do this?” 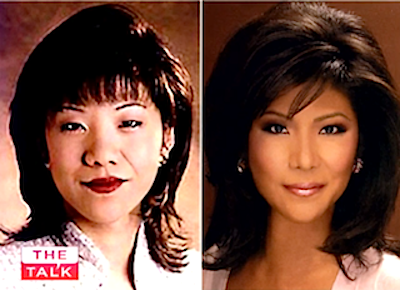 Julie Chen, before and after plastic surgery on her eyes