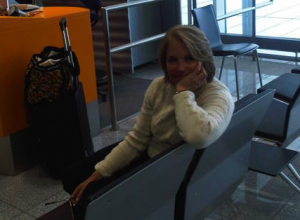 Couric is expected to anchor from Egypt tonight.

Getting anchors from New York to the big international story–fast–was no easy undertaking, especially with flights cancelled and uncertainty everywhere. At CNN, AC 360 executive producer Charlie Moore had was given the task of getting Anderson Cooper into the air and on the ground–first. “Visas were secured at the 11th hour Friday and getting a flight has been shaky,” Moore told Mediaite. “It’s a very fluid situation on the ground so we have had to find many ‘work arounds’ to pull this off so far.”

At ABC, Christiane Amanpour (who anchored This Week from Cairo Sunday) and David Muir lead the Egypt-based coverage.

At CNBC, Erin Burnett is in Egypt, and was there in time for a special weekend show, “Crisis in Egypt: Markets, Money & The Middle East” hosted by Tyler Mathisen and Melissa Francis. CNBC rushed to provide in-depth weekend coverage in time for the opening of Asia markets live during the special.