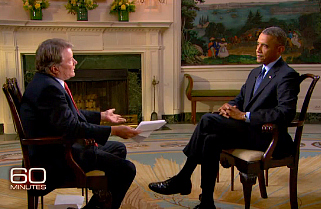 During a long and detailed interview Sunday night, 60 Minutes correspondent Steve Kroft challenged President Barack Obama on his strategy to defeat ISIS without deploying U.S. ground troops, sounding skeptical about the Iraqi military’s willingness to take on the Sunni militants, and wondering whether the U.S. was going to wind up shouldering the entirety of the burden.

“With the allies, with their ground troops, and if we do our job right and the Iraqis fight, then over time our role can slow down and taper off,” Obama said. “And their role reasserts itself. But all that depends. And nobody’s clearer than I am about this. That the Iraqis have to be willing to fight. And they have to be willing to fight in a nonsectarian way. Shiite, Sunni, and Kurd alongside each other against this cancer in their midst.”

“I think everybody applauds the efforts that you’ve made and the size of the coalition that has been assembled,” Kroft added. “But most of them are contributing money or training or policing the borders, not getting particularly close contact. It looks like once again we are leading the operation. We are carrying –”

“That’s always the case,” Obama said. “America leads. We are the indispensable nation. We have capacity no one else has. Our military is the best in the history of the world. And when trouble comes up anywhere in the world, they don’t call Beijing. They don’t call Moscow. They call us. …That’s how we roll. And that’s what makes this America.”