CBS’ Nancy Giles: Maybe White People Are ‘Trying To Eliminate All These Abortions’ To ‘ Build Up The Race’
Video

CBS’ Nancy Giles: Maybe White People Are ‘Trying To Eliminate All These Abortions’ To ‘ Build Up The Race’ 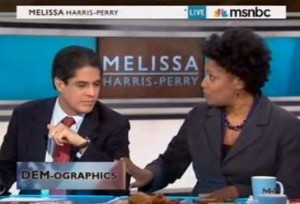 On Saturday’s edition of her show, MSNBC host Melissa Harris-Perry moderated her panel in a discussion on voting demographics. Last week’s exit polls, she shared, showed that 93 percent of the black vote went to President Barack Obama, as did 71 percent of the Latino vote and 73 of the Asian-American vote.

“Given the increased proportion of the electorate that those groups represent,” said Harris Perry, “[President Obama’s] was a coalition that won the election. So we know that these minority groups will only continue to grow until people of color in the United States are the majority. But demographics? Demographics are not electoral destiny.”

“I think that the news of the demise of the white man is vastly overstated,” she shared to laughs around the table. “It’s been a weird couple of days.”

Panelist Nancy Giles of CBS News Sunday Morning nodded in agreement. “It’s been weird to watch white people report on this,” she said. “And, you know, when you just showed that graph of the decline in the numbers, I thought, ‘Maybe that’s why they’re trying to eliminate all these abortions and stuff. They’re trying to build up the race.’ You know, maybe.”

“There is always eugenics associated with these questions, right?” Harris Perry offered. [Indeed, there has been much study — and conflicting conclusions — on whether, for example, Margaret Sanger was a proponent of racial eugenics.]

For what it’s worth, I’m fairly certain she was kidding (like the others around the table, I reacted by laughing). But what say you, oh most gentle of readers?