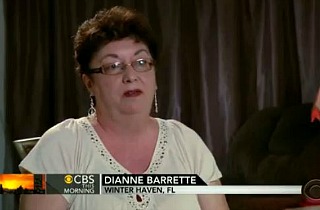 A visibly distraught woman who recently lost her health insurance plan because of the new requirements within the Affordable Care Act recently expressed her frustrations to CBS News. In a report about the number of people losing their health plans, in spite of assurances by the president, one Florida woman choked up slightly while revealing that she will have to pay more than $500 monthly for the coverage she previously paid just $50 for.

CBS News’ Jan Crawford reported on Monday that the ACA’s broken federal website is unlikely to be fully functional until after weeks of repair work. In the interim, she reported, millions of Americans are losing their health insurance plans and are being told that they will have to pay far more for their current level of coverage.

“For many, their introduction to the Affordable Care Act has been negative,” Crawford reported.

She also noted that the fact that so many are losing their health care plans is “directly at odds with repeated assurances by the president.”

“What I have right now is what I’m happy with,” Barrette said. “I just want to know why I can’t keep what I have. Why do I have to be forced into something else?”