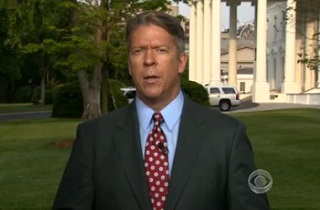 Last week, ABC News’ Jon Karl reported on emails that he said he’d obtained, that purported to show the process involved in developing the talking points on the September 11 attacks in Benghazi, Libya. Once CNN’s Jake Tapper actually did obtain a real email, and the White House subsequently released the actual email chain, Karl’s “emails” were revealed to be summaries, provided by a source, which contained invented quotes and significant omissions. On Thursday night’s CBS Evening News, Chief White House Correspondent Major Garrett reported that a Republican source was behind the invented quotes, which were also leaked to CBS News’ Sharyl Attkisson, a fact that Karl did not disclose in his original report, or his followup, and which Attkisson did not disclose, either.

Anchor Scott Pelley began by noting that, at a joint press conference with Prime Minister Erdogan of Turkey, President Obama “called for tighter security for U.S. diplomatic facilities to prevent an attack like the one in Benghazi, Libya, last year that killed U.S. Ambassador Chris Stevens and three other Americans.”

Pelley added, “Of course, Benghazi has become a political controversy. Republicans claim that the Administration watered down the facts in talking points that were given to U.N. Ambassador Susan Rice for television appearances while Mr. Obama was running for reelection. Republicans on Capitol Hill claim that they had found proof of this in White House e-mails that they leaked to reporters last week. Well, it turns out some of the quotes in those e-mails were wrong. Major Garrett is at the White House for us tonight. Major?”

CBS News Chief White House Correspondent Major Garrett then reported on the source of those invented quotes, and offered his analysis of their effect on the Republican narrative. “Scott, Republicans have claimed that the State Department under Hillary Clinton was trying to protect itself from criticism,” Major began. “The White House released the real e-mails late yesterday and here’s what we found when we compared them to the quotes that had been provided by Republicans. One e-mail was written by Deputy National Security Advisor Ben Rhodes. On Friday, Republicans leaked what they said was a quote from Rhodes. ‘We must make sure that the talking points reflect all agency equities, including those of the State Department, and we don’t want to undermine the FBI investigation.'”

“But it turns out, in the actual e-mail Rhodes did not mention the State Department,” he continued. “It read ‘We need to resolve this in a way that respects all the relevant equities, particularly the investigation.’ Republicans also provided what they said was a quote from an e-mail written by State Department Spokesman Victoria Nuland. The Republican version notes Nuland discussing ‘the penultimate point is a paragraph talking about all the previous warnings provided by the Agency (CIA) about al-Qaeda’s presence and activities of al-Qaeda.'”

“The actual e-mail from Nuland says ‘the penultimate point could be abused by Members to beat the State Department for not paying attention to Agency warnings,'” Major said, adding “The CIA agreed with the concerns raised by the State Department, and revised the talking points to make them less specific than the CIA’s original version, eliminating references to al Qaeda and affiliates, and earlier security warnings.”

Garrett concluded, “There is no evidence, Scott, the White House orchestrated these changes.”

ABC News has, thus far, defended Karl’s reporting as “consistent with” the actual emails, and has not addressed the attribution issue, except to say that “”Karl’s report could have been even clearer” that the reporting was not based on the actual emails. This analysis by Major Garrett, as respected and objective a journalist as there is, contradicts that notion.

Here’s the clip, from The CBS Evening News:

—-
Managing Editor’s note: This post has been edited since its original posting – Jon Nicosia