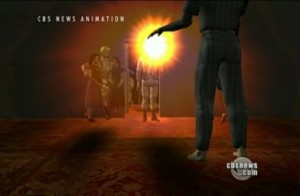 Since the announcement that terrorist leader Osama bin Laden was killed, there has been a general assumption that the raid would have been captured on video. Now, CBS News national security correspondent David Martin is reporting that, indeed, all of the 25 Navy SEALs who participated in the raid were equipped with helmet cameras that filmed the whole thing. Based partially on reporting from those tapes, CBS created an animated simulation of parts of the raid.

The Obama administration’s decision not to release photos of bin Laden’s corpse, along with other security concerns, means that it is very unlikely that these tapes will ever see the light of day, but the information on them is already helping to form a clearer picture of what happened during the raid. From CBS News:

Officials reviewing those videos are still reconstructing a more accurate version of what happened. We now know that the only firefight took place in the guest house, where one of bin Laden’s couriers opened fire and was quickly gunned down. No one in the main building got off a shot or was even armed, although there were weapons nearby.

The SEALs first saw bin Laden when he came out on the third floor landing. They fired, but missed. He retreated to his bedroom, and the first SEAL through the door grabbed bin Laden’s daughters and pulled them aside.

When the second SEAL entered, bin Laden’s wife rushed forward at him — or perhaps was pushed by bin Laden. The SEAL shoved her aside and shot bin Laden in the chest. A third seal shot him in the head.

CBS News produced an animated simulation of the raid, based on these reports, and while it is obviously only intended to deliver a rough idea of these events, there is one conspicuous omission. The figure representing Osama bin Laden is only ever shown from the chest down, while depictions of the SEALs, bin Laden’s daughters, and his wife are all shown from head-to-toe. Bin Laden’s wife is shown from behind, but the others all feature facial depictions.

Here’s the report, featuring the simulation: (from CBS News)