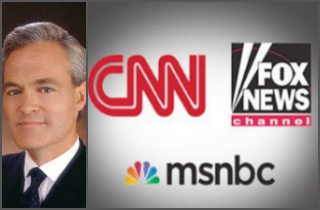 Speaking with Deadline this weekend, CBS Evening News anchor Scott Pelley gave his thoughts on the cable news landscape and whether or not broadcast networks have anything to fear from their cable competitors. Suffice it to say, he is skeptical that cable news has a long-term future in the media business.

Asked for his thoughts on the various changes in cable news — CNN’s Zucker transformation, MSNBC’s “non-breaking news” agenda, etc. — Pelley responded that the various networks are trying to “discover” themselves by exploiting niches. On the other hand, he said, “CBS News is not trying to figure out who it is. We’ve known who we are for many, many decades. And so that’s why you see CBS News being constant and not announcing that we’re changing the definition of news or that we’re veering left or veering right.”

Pelley explained that he sees Fox as “associated with the right” and MSNBC as “associated with the left” purely because of their respective viewer strategies. “They’ve decided to bite off one small part of the viewership and be happy with that 200,000 viewers, 300,000 viewers that they have. But when you are talking to 7 million viewers across the country, man you have got to represent everybody’s views and have got to give them the impression that you are being as honest as you know how to be,” he said of his own broadcast network.

When presented with the fact that some cable shows like Hannity and The O’Reilly Factor have viewership in the millions, Pelley said:

“We measure our audience in millions. They’re not big numbers. People talk about cable a lot and cable has a very high profile. Not a lot of people watch cable news, they just don’t. If you look at the Nielsen numbers, the cable channels have a few hundred thousand viewers at any given moment. The CBS Evening News again has 7 million viewers, ABC has 8 million viewers. Brian [NBC’s Williams] has almost 9 million. Altogether we have about 25 million viewers on any given night. That’s a very different order of magnitude.”

When asked whether it’s time CBS get its own cable news network like how NBC has MSNBC and Fox has Fox News Channel, Pelley shot down the idea, explaining his belief that cable may soon become irrelevant:

“You know, I wonder whether we might have moved beyond the time of the cable news network. Isn’t it all going to the Internet now? Is there really a reason for a news organization such as ours to establish a cable channel when we could establish a much bigger footprint if you will, on the Internet? So, these are decisions that are not at all up to me. We’ve got a lot of really smart people who think about these things and work on these things, but if you ask me, I wonder whether that’s a necessary step any more.”