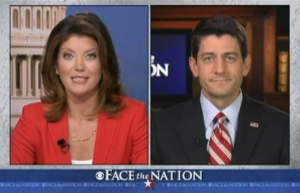 On Sunday’s Face the Nation, Norah O’Donnell took Paul Ryan to task regarding his past voting record when it came to cuts in defense spending. Reminding Ryan that he’s criticizing the president for a measure that he, too, voted for, O’Donnell pressed the GOP vice presidential nominee on his stance.

O’Donnell noted that Mitt Romney said Republicans were wrong to agree to a debt deal last summer that included automatic cuts to defense spending. “He’s talking about you because you voted for those cuts, correct?” she asked Ryan.

“I did,” Ryan said, adding that he voted for them because he was working to reach common ground with the president and Democrats to “get a down payment on deficit reduction.” He went on to note that he authored and passed a bill “to prevent the president’s irresponsible, devastating defense cuts that were occurring, by cutting wasteful Washington spending in other areas of government.”

O’Donnell reiterated that the defense cuts are part of the Budget Control Act, and that Ryan voted for that act. She then dug up a statement Ryan put out following the legislation, in which he called it a “victory” and a “positive step forward.”

“So, you voted for defense cuts, and now you’re criticizing the president for those same defense cuts that you voted for and called a victory,” she pressed. Ryan disagreed, again noting that the House passed a bill to prevent the cuts, but the Senate didn’t do anything about it.

They got a bipartisan agreement, Ryan said, but the president hasn’t fulfilled his end of that agreement. “The goal was never that these defense cuts actually occur,” he said. O’Donnell then went in to more specifics, breaking down the cuts that were in the legislation, noting that the $1 trillion cuts included those for defense spending, which Ryan voted for. Ryan defensively said that wasn’t the case, as the two sparred back and forth with the specific numbers.

The reason the defense cuts are in the legislation, he said, is because of the Obama administration, whose budget plan he does not support.