CBS Offered Letterman Spot to Neil Patrick Harris, But He Said No
AUDIO

CBS Offered Letterman Spot to Neil Patrick Harris, But He Said No 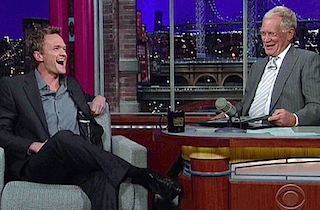 It turns out there was some credence to those Neil Patrick Harris Late Show rumors. During an appearance on Howard Stern’s show Wednesday, Harris confirmed that CBS did try to woo him to replace David Letterman, as well as possibly Craig Ferguson, but the actor turned them down.

Harris said that CBS President Les Moonves and entertainment head Nina Tassler called him in to talk about the possibility of him taking Letterman’s job. They even served him some sushi to help seal the deal. This was before Letterman announced he was retiring, so presumably the meeting came before CBS offered the gig to Stephen Colbert.

“I was surprised he pitched me that idea,” Harris said, adding that he didn’t feel his skill set is suited to the traditional late night format. “I think I would get bored of the repetition fast, and that the structure of it is so set, that I don’t have any interest in doing monologue, commercial, sketch, guest, guest, guest, musical act, good night.”

Instead, Harris pitched a weekly variety show idea to CBS. And while they passed on that at the time, he said it could still happen in the future. When Stern asked Harris if he could do that kind of show at 12:30 a.m. when Ferguson departs that slot later this year, he said he’s just not interested in hosting a show every night.

When CBS first announced the news about Colbert, Tassler said he was “head and tails above everybody else” when it came to filling Letterman’s big shoes. But this new information begs the question: Did she mean everybody but Neil Patrick Harris?