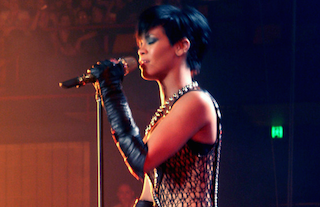 After a week dominated by the release of an elevator surveillance video showing Baltimore Ravens running back Ray Rice knocking out his then-fiancée, CBS Sports has apparently decided that opening Thursday night’s NFL game between the Ravens and the Pittsburgh Steelers with a song from pop star — and domestic assault victim — Rihanna, would not be appropriate.

According to Sports Illustrated, CBS had planned to air a pre-recorded performance of Rihanna singing “Run This Town” with added narration by actor Don Cheadle as well as an additional comedic segment. But the network has instead scrapped the whole thing in favor of a more somber news report from CBS This Morning host Norah O’Donnell, who conducted a sometimes-uncomfortable interview with NFL Commissioner Roger Goodell about the Rice situation earlier this week. The pre-show will air at 7:30 p.m. ET on CBS.

“It’s important to realize we are not overreacting to this story but it is as big a story as has faced the NFL,” CBS Sports chairman Sean McManus told SI.com. “We thought journalistically and from a tone standpoint, we needed to have the appropriate tone and coverage. A lot of the production elements we wanted in the show are being eliminated because of time or tone.”

McManus insisted that no one from the NFL had dictated to CBS what should or should not be included in the pre-game show, pointing to O’Donnell’s interview with Goodell as being “indicative of our position with respect to asking the hard questions and reporting the story.”