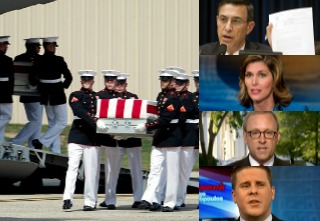 There is a persistent and pernicious myth clung to by supporters of this White House regarding a misrepresented quote in an early report regarding the interagency exchange of emails relating to how the Benghazi talking points were first formed. This fable, advanced even by members of President Barack Obama’s administration, centers on the notion that congressional Republicans or their staffers “doctored” elements of that email exchange and fed them to reporters in order to make the president and his administration look bad. This claim is embraced and repeated by the president’s supporters with measure of desperation that is almost directly proportional to the mounting evidence refuting it. Still, the notion that Republicans mislead credulous reporters into thinking the White House was primarily interested with observing the State Department’s concerns about their own image in the wake of the Benghazi attacks persists. Know, however, that those who repeat to this defamatory and baseless claim are merely regurgitating a spin designed to protect politicians.

By now, you know the story. Members of Congress and their staffers were allowed to preview but not keep an email exchange regarding the formation of the Benghazi talking points. Some reporters, notably CBS investigative reporter Sharyl Attkisson and ABC News Chief White House Correspondent Jonathan Karl, were allowed to access handwritten notes on that exchange. While most of the 100 page conversation was transcribed perfectly accurately, one particular sentence attributed to Deputy National Security Adviser for Strategic Communication, Ben Rhodes, was misquoted.

That sentence suggested that the White House was as or more concerned with protecting the reputation of the State Department’s Victoria Nuland, who was apprehensive about being accused of ignoring multiple warnings from the CIA relating to the deteriorating security situation in Benghazi, as they were about discovering what led to the attack itself. This was not the case. The actual sentence composed by Rhodes acknowledged that the investigation into the attack should be every agency’s primary concern.

The president’s Senior Advisor on Strategy and Communications Dan Pfeiffer accused Republicans on multiple Sunday shows on May 18 of deliberately misleading reporters with “doctored” emails. The administration appears to presume that by activating their supporters to defend the White House against a “vast right-wing conspiracy,” they can dilute the gravity of the charge that they willfully misled the public in the wake of the Benghazi attack. The fact that even Washington Post fact checker Glenn Kessler gave Pfeiffer’s claim three “Pinocchios” has not reduced the zeal with which pro-White House devotees parrot this charge.

Worse still, some of the president’s supporters have actively sought to discredit the reputations of both Attkisson and Karl – two of the nation’s finest and most credentialed reporters – for misquoting the actual email account. I have examined the claims that Attkisson acted in bad faith or was overly credulous and determined them to be disingenuous. But Karl, too, has been unfairly smeared by supporters of the White House’s narrative regarding the Benghazi talking points.

Like Attkisson, Karl’s reporting on the emails was almost entirely accurate. He, too, had access to a misquoted handwritten note which he reported in the 16th paragraph of his initial ABC News online report. Karl expressed his regret that he had not made it clearer in his initial report that what he was privy to were only summaries of the email exchange, but the exchange itself validated his reporting when it was released by the White House. The nut of his original report – that the talking points were edited 12 times in order to obfuscate the politically inconvenient truth that a coordinated, Islamist terror attack had been conducted in North Africa just weeks before a presidential election – was entirely true.

The strategy being employed by the president’s supporters is a rather transparent one. Elevate the small misstatement in order to discredit an entire narrative – or, at least, cast doubt on every legitimate question surrounding the administration’s response to Benghazi. In spite of the fact that reporters and Republican staffers have been cleared of disseminating “doctored” emails, that myth persists. Like all conspiracy theories, it will live on in the darkest corners of the internet. Know, however, that there is no truth to it and those who perpetuate that rumor are advancing a partisan narrative designed to protect the occupant of the highest office in the land.