CBS’s Major Garrett Confronts Obama on Broken ‘Keep Your Plan’ Promises: ‘Do You Regret It?’
video

CBS’s Major Garrett Confronts Obama on Broken ‘Keep Your Plan’ Promises: ‘Do You Regret It?’ 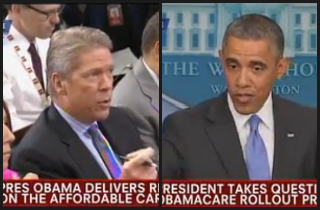 Following remarks on a “keep your plan” fix for the Affordable Care Act, CBS reporter Major Garrett grilled the president Thursday afternoon on whether Americans deserve “greater accountability” surrounding the administration’s repeated promises to the American people that “if you like your plan, you can keep it.”

“Do you not believe, sir, the American people deserve a deeper, more transparent accountability from you as to why you said that over and over when your own statistics alerted your policy staff — and I presume you — to the fact that millions of Americans would, in fact, probably fall into the very gap you’re trying to administratively fix right now?” he asked, adding another question: “You were informed that [Healthcare.gov] was failing the most basic tests internally, and yet a decision was made to launch the web site on October 1st. Did you make that, and if so, do you regret that?”

The president responded that he was “not informed directly” about the website’s potential failings. “Had I been informed, I wouldn’t be going out saying, boy, this is going to be great, you know?”

“I’m accused of a lot of things, but I don’t think I’m stupid enough to go around saying this is going to be like shopping on Amazon or Travelocity a week before the website opens if I thought it wasn’t going to work,” he added.

And regarding the “keep your plan” promises, Obama told Garrett: “There is no doubt that the way I put that forward unequivocally ended up not being accurate. It was not because of my intention not to deliver on that commitment and that promise. We put a grandfather clause into the law, but it was insufficient,” he conceded.

Admitting that the grandfather clause did not work sufficiently for the millions of Americans who recently lost their healthcare plans, Obama reitreated: “That’s on me. And that’s why i’m trying to fix it. and as I’ve said earlier — I guess last week and I will repeat — that’s something I deeply regret, because it’s scary getting a cancellation notice.”

“No,” the president replied. “My expectation was that for 98% of the American people either it genuinely wouldn’t change at all, or they’d be pleasantly surprised with the options in the marketplace and that the grandfather clause would cover the rest. That proved not to be the case. And that’s on me. And the American people — those who got cancellation notices — do deserve and have received an apology from me.”