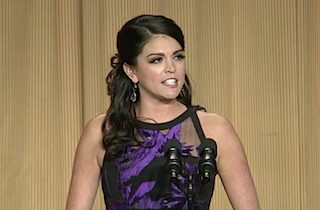 “I took Amtrak here,” she told the crowd. “It was way more luxurious than I thought. Did you know they have massage seats available? All you have to do is sit in front of Joe Biden.”

She saluted the Secret Service, saying, “They are the only law enforcement agency in the country that will get in trouble if a black man gets shot.”

Strong then went down the list of media outlets, picking them out as she went:

On MSNBC: “MSNBC shows so many prison documentaries they’re making Ed Schultz get a teardrop tattoo.”

On Fox News: “Fox News has been losing a lot of viewers lately, and may they rest in peace… That channel is all just hot blonde ladies and all dudes. Every show on Fox News looks at a party scene from Weekend at Bernie’s.”

On CNN: “It’s comforting to know that whenever a big story breaks, I can turn to CNN and watch Anthony Bourdain eat a cricket.” And later, “We are really in a golden age of television, but I have to say I still see so many negative or trails of black and gay people out there. I mean, it’s 2015, and we still have TV characters like Don Lemon? It’s ridiculous.”

“What can I say about Brian Williams?” she asked. “Nothing, because I work for NBC.”

Strong did not hide her affection for Hillary Clinton, especially in comparison to the Republican field. She even made the press in attendance repeat after her: “I solemnly swear not to talk about Hillary’s appearance, because that is not journalism.”