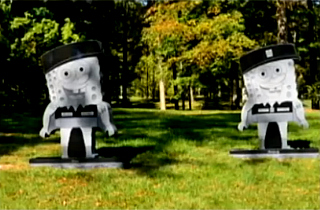 A Cincinnati-area cemetery has removed two large SpongeBob SquarePants-themed headstones after approving them for a slain soldier’s plot, leading to a dispute between the family and the contrite burial grounds owner.

On Valentine’s Day of this year, 28-year-old Sgt. Kimberly Walker was found dead in a Colorado hotel room. Her boyfriend, Sgt. Montrell Mayo, was charged with first-degree murder. Walker apparently loved Nickelodeon’s SpongeBob so much, her family decided to honor her with a headstone based on the nautical cartoon creature.

Walker’s mother Deborah and family purchased six plots at the Spring Grove Cemetery and ordered two 7,000-pound headstones of SpongeBob wearing military garb, reportedly costing more than $13,000 each. One of the 6-foot-8-inches-tall SpongeBobs wears an Army uniform in honor of the late Kimberly; the other wears a Navy uniform for twin sister Kara, a currently-serving IT specialist.

The family paid 10-percent of the burial costs upfront and claims the cemetery gave them approval to erect the monuments. But despite that previous go-ahead, the cemetery has now removed the headstones claiming they are in conflict with the burial grounds’ “historic” reputation.

The cemetery’s president apologized for the miscommunications and has promised to work with the family to compromise on an alternative headstone, at the burial grounds’ expense. “As an historic cemetery, we must constantly balance the needs of families who have just suffered a loss with the thousands of families who have entrusted us in the past,” he said. Spring Grove Cemetery is the second-largest in the U.S. and is a designated National Historic Landmark.

Despite the apologies, Deborah Walker insists the SpongeBob memorials should stay up. “We bought the plots, all six of them,” she said. “We put the monuments there, we did what we had to do and they said they could provide that service to us.”

Watch the report below, via WLWT-TV: