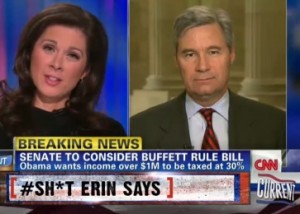 On Thursday night’s edition of Current TV’s The Young Turks, host Cenk Uygur blasted CNN’s Erin Burnett (again) in a segment called “Sh*t Erin Says,” accusing the OutFront host of “right-wing talking points and scaring retired people” during an interview with Sen. Sheldon Whitehouse (D-RI). At issue was Burnett’s suggestion that an increase in taxes on capital gains and dividends would hurt retirees, when such income is overwhelmingly made by millionaires.

Uygur took particular exception to the assertion embedded in Burnett’s question to Sen. Whitehouse, “Would you let corporations not pay taxes on the dividends, then? And I ask because it’s important. It’s not just wealthy people that get dividends. It’s retired Americans who get a lot of their income from dividends and capital gains, who also will be hurt by capital gains rates going up as they do under the president’s plan.”

Cenk points out that for people making $100,000 a year or less, capital gains make up only 1.4% of their income, and 54% of capital gains income is made by households that make a million or more a year. His point is that 1.4% hardly qualifies as “a lot of their income,” and while Burnett didn’t say which retired Americans she was talking about, the implication was that ordinary retirees would be hit hard by a capital gains tax hike.

Those numbers are probably even starker today, since Cenk’s figures are taken from 2003 IRS figures, before the financial crisis wiped out so may ordinary Americans’ retirements. Here’s a chart showing the percentage of capital gains income for different income levels: 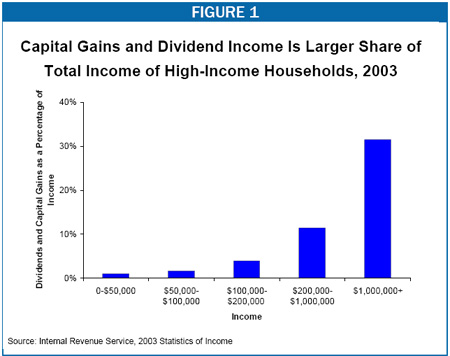 This isn’t the first time that Burnett has been the object of her time slot competitor’s ire, but Cenk’s criticism of Burnett far predates their alignment on the cable news schedule. Burnett first hit my radar in 2007 when The Young Turks featured a clip of her jaw-dropping comments about poisonous toys from China. Late last year, Uygur also ripped Burnett for her coverage of Occupy Wall Street.

As a parent, the China comments really stuck with me, but after I saw the Occupy segment in October, I wondered if I was giving Erin Burnett a fair shake. I watched OutFront for a few days, and for the most part, it was a straight broadcast with an appealing host, and in that time, Burnett did some good reporting on things like the intense backlash against Bank Of America’s new ATM fee.

More recently, Burnett did a tough, informative segment about Mitt Romney’s tax windfall from carried interest, which belies the notion that she’s a right-wing shill. That impression probably arises, though, from the fact that there’s an awful lot of overlap between Republican talking points and business talking points. Business reporting, like sports, has evolved into an insular beat, wherein the concerns of the world outside that microcosm are ignored, or marginalized. If a company records a huge profit, that’s “good news,” even if they did it by laying people off or breaking a union.