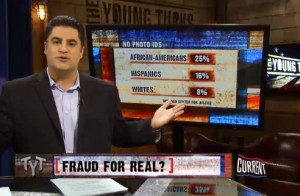 On Wednesday night’s The Young Turks (on Current TV), host Cenk Uygur took The New York Times to the woodshed for that most irritating of mainstream media foibles: “some say”-variety false objectivity. Uygur took apart the Times’ Charlie Savage for his coverage of Attorney General Eric Holder‘s Tuesday speech on voting rights in Austin, Texas, and even went so far as to accuse the Gray Lady of conservative bias. Uygur is 99.64% right, 0% wrong.

The speech itself was an effort to raise awareness of attempts to limit voting rights through gerrymandering, fraudulent propaganda campaigns, and stricter voter identification laws. On that last topic, Uygur took issue with this section of Savage’s report:

Proponents of such restrictions — mostly Republicans — say they are necessary to prevent voter fraud that could cancel out the choices of legitimate participants. Opponents — mostly Democrats — say there is no evidence of meaningful levels of fraud and contend that the measures are a veiled effort to suppress participation by hundreds of thousands of eligible voters who lack a driver’s license.

Cenk’s issue is with the fact that Savage presents these claims as equal, and offers no factual analysis to evaluate their merits. This is a classic mainstream media dodge, one which many media critics have pointed out. In this case, it is even more egregious than usual because the facts are so lopsided in one direction.

Voter fraud, the kind where someone actually casts a vote when they shouldn’t have, is extremely rare, whereas voter ID laws will impact millions of voters, mostly from traditionally Democratic constituencies, and disproportionately among minorities, particularly black Americans. You can debate whether the intent of voter ID laws is racist, but the effect definitely is. I would argue that support for these measures is the result of privileged ignorance. Showing a photo ID is “no big deal” to someone who already has one.

If Savage wanted to avoid making an editorial judgment, he could have covered himself by directly quoting Holder, who was, if anything, understated on the subject:

Let me be clear: voter fraud is not acceptable – and will not be tolerated by this Justice Department.  But as I learned early in my career – as a prosecutor in the Justice Department’s Public Integrity Section, where I actually investigated and prosecuted voting-fraud cases – making voter registration easier is simply not likely, by itself, to make our elections more susceptible to fraud.  Indeed, those on all sides of this debate have acknowledged that in-person voting fraud is uncommon.  We must be honest about this.

Honesty is in short supply on the conservative side of this debate. Ask one of them to show you widespread voter fraud, and they’ll either change the subject, accuse you of being racist for not believing minorities are “capable” of getting ID (an identical argument could have been applied to poll taxes and exams. “Oh, are you saying Negroes aren’t ‘capable’ of passing a literacy test, you racist?”), or give you examples of voter registration fraud, which has nothing to do with casting fictitious votes. Actual voter fraud, as Uygur points out, isn’t just “uncommon,” it’s lightning-strike-twice rare. I guarantee at least six idiots will not even bother reading this whole article, and will make these exact arguments in our comments section.

But, in Savage’s defense, he does offer some evidence one way or the other. Later in the article, he talks to a woman who organized a combination Fast and Furious/Voter ID protest outside the speech:(emphasis mine)

Catherine Engelbrecht, who said she organized the rally, faulted Mr. Holder for taking what she called divisive tactics of suggesting that “photo voter ID” laws are an effort to “suppress” eligible voters. She said such laws are necessary to guard against “real problems with the integrity of the elections process.”

Such problems, Ms. Engelbrecht said, included people showing up at polls without any identification, or showing up with multiple voter registration cards in different names, and being allowed to vote; she said she had not witnessed such irregularities during her own service as a volunteer at polling places, but had heard about them happening from other poll watchers.

I said that Cenk was 99.64% right because I sort of disagree that this is “conservative bias,” although that could be part of it. Years of conservatives “working the ref” by crying “liberal bias” has resulted in a combination of laziness and cowardice that makes the mainstream media not want to deal with the headache of telling the truth. I understand the impulse. There are times when I have trouble writing something because I just dread the combination of stupidity and dishonesty I know I’ll have to face (like with this piece) when I’m done. If you can’t fight through that impulse, you ought to try another line of work.