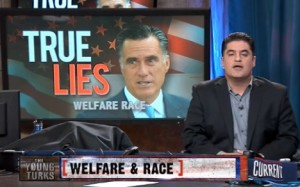 Although much of the mainstream media is afraid to address racial issues in this presidential campaign, Republican presidential candidate Mitt Romney‘s recent welfare-based attacks on President Obama have begun to test that wall of silence. Fact-checkers Politifact actually flirted with giving it a name when they said Romney’s false ad was “Inflaming old resentments,” but Young Turks host Cenk Uygur called it what it is: an echo of racist politics that go back a long way, and extend into the present.

Just as everyone knew what Newt Gingrich‘s “Food Stamp President” remarks meant before he actually explained it in no uncertain terms, everyone knows what Politifact means when they say Romney is “Inflaming old resentments,” even if the site is too afraid to finish that sentence.

On Wednesday night’s The Young Turks, though, Cenk pointed out the obvious parallels between Mitt Romney’s false attack on President Obama regarding welfare reform and the “Welfare Queen” politics pioneered by Ronald Reagan, who kicked off his general election presidential campaign with a speech on “states’ rights” in Philadelphia, Mississippi, where three civil rights activists were murdered in 1964.

However, there’s no need to go all the way back to Ronald Reagan to understand what Mitt Romney’s current attack is all about, or even back to 2009-era Rush Limbaugh. You don’t even have to go all the way back to January of this year, when the man who is leading Romney’ attack, Newt Gingrich, exposed the code by directly naming black people as “satisfied with food stamps.”

You don’t even have to go all the way back to Mitt Romney’s pointed trashing of “Obamacare” at the NAACP convention in July, or his subsequent admonition that people who want “free stuff” should vote for President Obama.

While those are all helpful in understanding why Mitt Romney has chosen to go out of his way to lie this issue into the campaign, you only have to go back a little more than a week, to Romney’s remarks in Israel about the role of “culture” in economic prosperity. He initially came under fire when his remarks were cast as a racist attack on Palestinians, but then the media completely missed the fact that his campaign’s defense was, essentially, that Romney’s cultural bigotry is not confined merely to Palestinians, that he also slammed other cultures for being inferior, and therefore making themselves poor.

Romney himself penned an op-ed in which he reinforced that premise: (emphasis mine)

But what exactly accounts for prosperity if not culture? In the case of the United States, it is a particular kind of culture that has made us the greatest economic power in the history of the earth. Many significant features come to mind: our work ethic, our appreciation for education, our willingness to take risks, our commitment to honor and oath, our family orientation, our devotion to a purpose greater than ourselves, our patriotism.

Romney is obviously aware that the United States doesn’t really have a monolithic culture, that we’re made up of a variety of cultures, which is why he says “a particular kind of culture,” a culture that doesn’t match up with welfare spokesman Newt Gingrich’s view of certain American cultures, the cultures that are “satisfied with food stamps,” or that have “no habits of working and have nobody around them who works…unless it’s illegal,” or, it would seem, the regional cultures in a bunch of red states.

There is no monolithic culture in America, but there is a dominant one, and it’s the one that Mitt Romney belongs to, the one he hopes will rescue him from the rest of us.