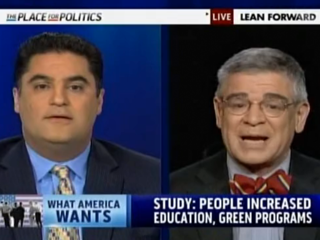 “I’m going to prove to you that the country is clearly and indisputably liberal,” proclaimed MSNBC evening host Cenk Uygur, citing statistics that showed Americans in favor of funding social programs, raising taxes, and cutting defense spending, Uygur argued that America was a left-of-center country and politicians failing to acknowledge that has done significant harm, but there’s a slight kink in the armor of this claim: Americans voted Republican in November. Needless to say Uygur didn’t take the news so well.

The poor messenger this time was University of Maryland economics professor Peter Morici, who got about four words in before Uygur began to loudly protest his claim. Those words, after “I think you’re missing a lot,” were that Americans elected “90, 95 Republicans last year,” to which Uygur began tut-tutting and say “nope” over. “Just because they elected them,” Uygur argued, “doesn’t mean they have the same priorities.” Morici, frustrated by this bizarre claim, sarcastically noted that he now understood that “you get to talk and I get to listen,” a claim that bought him enough time to lay down the groundwork for his main argument: “Americans are much more moderate than either political party or the networks with their slants will admit.” Questioned about the polls, Morici noted that Americans did believe in the idea of “shared sacrifice,” but even then this wasn’t a partisan idea.

The conversation then degenerated into a fairly contentious back and forth with such quips as Uygur complimenting Morici for his “condescention” and Morici responding that he had “shown quite a bit, you just don’t want to acknowledge it.” Uygur also argued that Obama was “way to the right of the country” and concluded the debate by thanking Morici despite “being completely and utterly wrong.” Civil!