Cenk Uygur Goes Off On Bill O’Reilly, Calls Him ‘Nazi’ 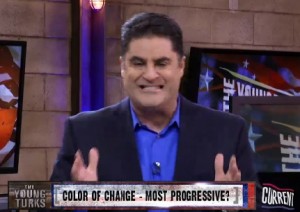 “You’re gonna call us fascists all day long, and we’re not going to respond?” he continued. “Well, those days are over…Nazi!”

Cenk was reacting to an O’Reilly Factor segment from a few days ago in which O’Reilly and guest Laura Ingraham groused about Color Of Change’s “fascist tactics” and attempts to “shut down conservative speech.”

O’Reilly also said “Not only do they not want free speech, but if you go against their ideology they will hurt you. Hurt your family.”

Cenk said “It’s actually you right-wingers who try to hurt people and their families, by killing them, by bombing abortion clinics, et cetera.”

Perhaps a better comparison might have been things like the right-wing smear campaign against 12 year-old Graeme Frost, who delivered a Democratic radio address in 2006, and endured right-wing harassment (including heving his home address posted on the internet) for his trouble. ALEC, by contrast, is almost 40 years old, and (although Mitt Romney might argue the point) is not a human being.

It’s also curious that conservative electoral power (and indeed, that of ALEC) is tied to the idea that “money is speech,” yet O’Reilly appears to be saying, with his screed against ALEC, that speech isn’t speech. The Color Of Change campaign has been about raising ALEC member companies’ awareness of the group’s involvement in passing “Stand Your Ground” laws and voter ID measures that suppress minority votes. Many large companies, like McDonald’s, Wendy’s, and Pepsi, have responded by severing ties with the organization. ALEC has responded by dropping its “Public Safety and Elections task force.”

Sounds to me like everyone involved is exercising all kinds of freedom, so  I’m not sure what O’Reilly’s beef is. If McDonald’s and Pepsi think that an association with “Stand Your Ground” and voter ID model legislation is toxic to their brands, or even just plain wrong, why shouldn’t they be free to act on that belief? Isn’t this America?

Besides, there’s still plenty for ALEC to do, as Raw Story notes:

ALEC’s economic focus will continue to be on repealing the minimum wage, paid sick days laws, the estate tax, and capital gains taxes along with privatizing public lands and pushing state union-busting measures.