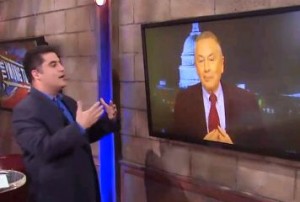 Emotions are running understandably high over the tragic killing of Trayvon Martin, and the police failure to arrest George Zimmerman, the man who admitted to shooting the 17 year-old, claiming self-defense. A prime example of this was Young Turks host Cenk Uygur‘s interview with gun advocate Larry Pratt, who says that Trayvon Martin should have run away.

On Friday’s edition of Current TV’s The Young Turks, host Cenk Uygur interviewed Larry Pratt, executive director of the Gun Owners of America, who cited the newly-publicized claims of an alleged eyewitness to the shooting in claiming that Trayvon Martin had a duty to retreat on the night in question. The witness says that he saw George Zimmerman on his back, and Trayvon Martin on top of him, punching him. The witness says he ran to call 911, and “by the time I got upstairs,” Trayvon Martin was dead.

According to Pratt, this account changed his mind about the case, and he now thinks that Trayvon Martin “passed from becoming a victim to becoming an aggressor” when (according to this version of events) he had Zimmmerman on the ground, beating him. “[Martin] should have run away,” Pratt said. “He had his stalker on the ground. Once Martin had neutralized the threat, that’s when he should have taken off to get out of there. He doubled down, and he started to really beat the tar out of the guy.”

So, let me get this straight: according to Larry Pratt, you can shoot a guy who’s beating you, but you can’t beat a guy who’s about to shoot you? Was Trayvon Martin expected to outrun a bullet?

Uygur pointed out the odd contradiction in Pratt’s reasoning. “Funny how the kid with no gun is the one who, in your mind, gave up all his rights. But Zimmerman, the freak stalker who called the police 49 times on black males, called this guy a coon, chased him down with a gun — he has all the rights in the world.”

The fiery segment ended with Cenk telling Pratt “Now I know that I can stalk your ass, and if you dare fight back, I can put a bullet right in your chest, and go ‘Oh, he fought back, ha ha, he had Skittles in his pocket, he fought back, that guy with the tie, that white honkie, I shot him dead!'”

Zimmerman’s injuries were consistent with getting clocked in the face as he chased Trayvon Martin, but as Cenk points out, the account of this one witness is far from conclusive. Several other witnesses contradict his claim that it was Zimmerman screaming on that 911 tape, and several witnesses have reported being coached by police on the scene to corroborate Zimmerman’s story. That’s why the outcry has been, all along, for police to arrest Zimmerman and conduct a proper investigation.

But even given Pratt’s version of events (which goes well beyond what even that one witness had to say), it should make no difference to the claim of self-defense if Trayvon managed to knock Zimmerman down and go to town on him. The guy was chasing him with a gun. Beating Zimmerman unconscious would have been the only way to neutralize the threat.

This shouldn’t be a country where you can go out with a gun looking for “coons” or “honkies” to mess with, then just blow them away when you start to get your ass kicked.

Here’s the segment, in two parts, from Current TV’s The Young Turks: