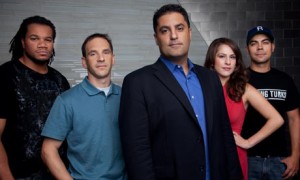 When Cenk Uygur brought his The Young Turks program to Current TV, the expectation was that the show, which was busy building an internet presence back when most people thought an “online audience” was the people staring at you at the DMV, would be a good complement to Keith Olbermann‘s Countdown. In fairly short order, though, TYT was overshadowing Olbermann, enabling the network to cut the cord with their big bonus baby. Now, Cenk is the tentpole for the network whose founder invented the internet that gave Cenk his start. The circle is complete.

During his defense of Chris Hayes‘ controversial remarks on the word “heroes,” Cenk mentioned that he thought Up with Chris Hayes was a “very good show,” which was a bit of surprising Kum Ba Yah from a guy who had a rather public, not-pretty split with Hayes’ network, made all the more interesting by the fact that when he left MSNBC, Cenk was offered a show on the network’s then-wasteland of prison docs and Dateline repeats. In an interview with Mediaite, Cenk spoke briefly about MSNBC’s weekend lineup (and what it might have looked like with him in it), the pitfalls of criticizing President Obama from the left, and the state of his new home at Current TV.

Cenk’s remarks about MSNBC’s weekend programming caught my attention, not just because it’s a little unusual for any media figure to offer praise to a rival, but because of his unique relationship to MSNBC and that time slot. In our brief interview, Cenk talked a little bit about that, but quickly moved on to other business, like his criticism of President Obama, and the prospect of a Mitt Romney presidency, among other things.

Tommy Christopher: On your show this week, you had some praise for Chris Hayes’ weekend show. Can you talk a little about what you like about it?

Cenk Uygur: I think Chris has a wonderful progressive show. I like that he’s thoughtful and he brings up intreresting topics that aren’t your typical talking points topics.

TC: What about Melissa Harris Perry?

Cenk: I haven’t seen as much of her show, so it would almost be unfair…There was a segment she did on the movie The Help that was really good, that we talked about on the show. My general sense is that she’s a little bit more pro-Obama than I am, but that might be an unfair assessment.

TC: You were offered a weekend show when you were leaving MSNBC. What do you think an Up with Cenk Uygur would’ve been like? Is America ready for Cenk Uygur at 8 am on a Saturday?

Cenk: (laughs) I think America’s ready for Cenk Uygur at any time. I’m sure that if I had done a show on MSNBC on the weekends, it would have been lovely. I just wanted to be able to do a show more independently, of course, and I think I gotta do a daily show, so that’s not the direction we went. But I’m glad they’re doing weekend shows. I think it’s just generally a good thing for progressives.

TC: You take a lot of heat from the left for your frequent criticism of the President. What’s that like?

Cenk: That’s one of the biggest things we have to deal with. ‘Oh, my God, not now.’ I guess under that theory, any year near an election, you’re supposed to fake your opinion. So if President Obama is doing profoundly un-progressive things, like drone strikes on civilians, during an election year, that’s supposed to rock! After the election year, they might allow you to criticize him on that, we’ll have to see.

TC: What do you say to somebody who says that pretty much no matter what you can say about President Obama as a criticism, it’ll be, like, ten times worse under Romney?

Cenk: You know, it’s actually gotten bad enough that I’m not sure it would be ten times worse. I believe it’d be worse, absolutely.

TC: How many times?

That’s not to say that Romney is any kind of alternative. He’s a comical one-percenter, obvious representative of Wall Street, I can’t believe that anyone outside of Wall Street is thinking about voting for him. What it does mean is that it sucks that these are our choices.

TC: How are things at Current? Are you happy there?

Cenk: Current gives us all the leeway and independence that we could ask for, we do a really strong progressive show, and they don’t mess with it at all. What I love is that we’re bringing all these progressives that you don’t normally see on television into the fold, and getting people to hear from them. So, it’s a perspective that you don’t normally see on television, because the rest of television is either pro-Republican or pro-Democrat. These guys are a breath of fresh air.

TC: No problems with the car service, keeping the lights on?

Cenk: (laughs) I’m not a guy who’s obsessed with the car service, so no, I’ve got no issues whatsoever.