Cenk Uygur: President Obama ‘Doesn’t Have The Guts’ To Fight For Contraceptive Mandate 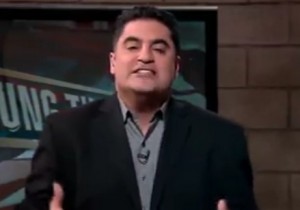 On Tuesday night’s The Young Turks, host Cenk Uygur went the eff off on President Obama over what he sees as administration signals of a compromise on the religious employer exemption to the Affordable Care Act’s Preventive Services Mandate. Loudly calling it like he sees it, Uygur said that President Obama “doesn’t have the guts” to fight conservatives on the issue, and that “his natural instinct” to “run for the hills” kicks in whenever he’s challenged a little bit.

It is that penchant for unvarnished spleen that has earned Uygur the following he has, but has also led to some backlash among liberals. He doesn’t apologize for it, and frequently warns viewers that they’re going to get that unfiltered view, no matter the subject. For what it’s worth, I’d rather know what someone honestly thinks than not, but in this case, Cenk is jumping the gun a little bit, and goes too far, and in the wrong direction, in his criticism of the President.

Cenk cites polling data that shows overwhelming (58%) support for the Preventive Services Mandate among Catholics, with 52% supporting its application to religious employers like hospitals and schools. Another survey shows that 99% of reproductive-age women have used contraception, and 89% of fertile, sexually active women who do not want to become pregnant are currently practicing it. His conclusion is that this is an “enormously winning issue,” so “why on God’s green Earth” would the administration compromise?

Uygur played a clip from Tuesday’s Morning Joe, in which senior Obama adviser David Axelrod talks about such a compromise, and he’s right on target throughout 99% of the segment, concentrating on the need to extend the protections of the Preventive Services Mandate to all women, while respecting the “concerns” and “prerogatives” of religious organizations. The competing interests here are equal protection for millions of women, versus religious accommodation, not religious liberty. The First Amendment does not grant churches the right to impose their beliefs on employees who serve the general public.

Where Axelrod slips up is in saying that “we certainly don’t want to infringe on religious liberty,” which tacitly validates that disastrous, fallacious frame. There’s nothing wrong with accommodating the wishes of these organizations, as long as the rights of women aren’t also compromised. Conceding this “religious liberty” argument is the problem. It is this argument that makes this a losing issue for the President, and it is the administration’s failure to seize the framing of this issue as an equal protection argument from the outset that has led to this controversy.

Even greater than the administration’s failure, though, is the mainstream media’s, in the same regard. Even when they’re pushing back against it, the “religious liberty” frame is still the dominant reference point in this discussion, because squeaky religious wheels are getting all of the ink. If every mainstream newscast explained the mandate the way Cenk did at the beginning of this segment, and if the cable networks sought guests who are among the women being denied these services (surely, they exist), this thing would be playing out quite differently. Right now, it’s a reverse witch hunt, with religious leaders (and lots of their left-leaning followers) tying themselves to stakes of their own making.

The fact is, aside from Axelrod’s slip-up, the White House has consistently, if not aggressively, responded to this controversy with the appropriate set of priorities. As long as any eventual compromise recognizes those priorities, there’s nothing wrong with it. Unfortunately, there’s no compromise that will turn this into a win (the mainstream media has turned this into Obama vs. Church, rather than Church vs. Women), but if one can be reached, it’s the generous thing to do.