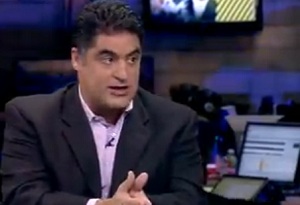 On Friday night’s edition of The Young Turks, host Cenk Uygur took aim at one of his favorite targets, CNN’s Erin Burnett, but in a more measured way than usual. Critiquing a segment of Burnett’s OutFront that featured an interview with Rep. Pete DeFazio (D-OR) that centered on the “entitlement reform” component of the fiscal cliff negotiations, Cenk noted the assumptions embedded in Burnett’s questions, and her attempt to put words in DeFazio’s mouth, but also noted that Burnett gave DeFazio fair chances to respond elsewhere in the interview. Burnett’s crime is really that of the entire mainstream political media, the premise that both “sides” must feel political “pain” in resolving the so-called fiscal cliff.

“Erin Burnett is someone that represents the rich, powerful, the establishment, in my opinion,” Cenk said, “and you can see it in her CNN reports all the time.”

Cenk set up a clip from Burnett’s show, in which Rep. DeFazio explains how deficit reduction can be achieved without gutting Medicare benefits. “Listen to her be incredibly incredulous about this,” he said, before playing a few snippets from OutFront.

“(President Obama) has said ‘Yes, I support raising the age on Medicare from 65 to 67,” Burnett says. “Simpson-Bowles talked about raising the age. Most people do, and say that’s really going to be the only way to get out of this. You really think we don’t have to make real changes, or is that just, I understand your constituents don’t want you to say anything…”

The implication is that DeFazio is opposing the change on nakedly political grounds, and not the merits of the policy.

“That doesn’t deal with the cost of prescription drugs,” Rep. Defazio replied, “and with overpriced and unnecessary medical care.”

“Fair,” Burnett interjects, as the clip cuts ahead to Burnett saying “Interesting point, but I still find it a little bit hard to believe. when you say we don’t have to make substantive change to a program that’s going to consume all of our federal spending if we keep going the way we’re going, we do need to make substantial changes. It’s going to hurt.”

“I just want to say 3 quick things about that,” Cenk said, following the clip. “#1: She’s putting words in his mouth. He explained, in the rest of the interview she let him speak though, to be fair…”

Panelist Dorothy Lucey chimed in, “You mean when he was shaking his head like that because he was trying to make a point?”
“He said: look, we’ve already put 400 billions of dollars of cuts on Medicare on the table and that’s our position, right?” Cenk continued. “That’s not even the Republican position. And here are the different ways that you can fix it. So the idea that we have to cut Medicare and Social Security to the bone is not the only idea out there. And I thought CNN was supposed to be objective, but what’s interesting is that when it’s a pro-establishment position, CNN is ready to go and defend the fortress… OK, no you have to cut medicare! You have to cut entitlements!”

“And finally,” Cenk concluded, “what I found really interesting is her dismissive tone about the constituents–I mean, I guess that’s what your constituents want… She said: it won’t be popular. We live in a democracy, why would we do that?”

The idea of raising the Medicare eligibility age from 65 to 67 has been floated as a way of achieving some of the deficit reduction required to strike a grand bargain, and the mainstream political media have posed this idea as a counterweight to the revenue increases that the President is seeking. Cenk is right about the unpopularity of the idea, which even 68% of Republicans oppose, but that’s not even the point. Raising the age will only shift those costs, at higher rates, and only partially away from the federal government. Those two extra years will either be paid for by the seniors themselves, who will be charged up to 3 times as much for health insurance on the individual market, or by the government in the form of Medicaid for those who can’t afford private insurance, or by private insurance companies.

What no one is talking about is that Medicare is a huge break for private insurers, who get to lay off their highest-risk patients onto the government. People with retiree group health insurance will be covered by their health insurance for those two extra years, at great expense to those companies. The amount of money they pay out in claims will far outstrip what they can take in in premiums, and the additional premiums will fall on those retirees’ employers.

The other problem is that, relatively speaking, 65 and 66 year-olds are bargains for Medicare, and eliminating them from the program would only succeed at making the overall pool of Medicare recipients older and sicker. If there was a way to eliminate the last 2 years of eligibility, you’d be on to something.

As Cenk said, Burnett deserves credit for letting Rep. DeFazio make his points, which he did well, and Burnett’s questioning is theoretically the sort of adversarial journalism you want, but the premise is complete nonsense, born out of the mainstream media’s fascination with false balance. Republicans are being forced to do something they don’t want to do (raise taxes), so there must be something as painful for the Democrats to do (gut Medicare). Why? Why should Democrats have to randomly do something stupid just because Republicans are defending an unpopular, untenable position? No reason at all. The only people who think this is a good idea are mainstream media types who may one day use Medicare, but will never depend on it.

The facts are, Republicans have to raise taxes on the wealthy because the wealthy are undertaxed, while Medicare needs to be protected because people are already under-covered. There are ways to achieve savings in Medicare without cutting benefits, some of which DeFazio talked about in that full OutFront segment: