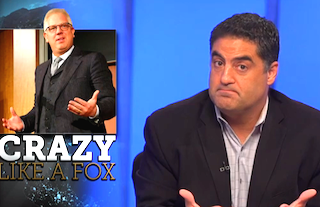 This week, Glenn Beck opened up about his years-long struggle with a rare neurological illness from which he says he is just beginning to recover. But there is at least one commentator on the other side of the political spectrum who is not totally buying Beck’s tear-filled revelation: The Young Turks’ Cenk Uygur.

“Glenn Beck recently came out on his own show and pretty much admitted that he was crazy,” Uygur said on his show Thursday, echoing Beck’s own comment about the disease making him “look crazy.” He added, “I thought I’d been saying that for a while.”

While Uygur admitted to feeling “a little bad” for Beck, he went on to call the conservative pundit’s claims “questionable” and mock the “mental fogginess” he’s experienced over the years. As for Beck’s claims that he’s on the mend, Uygur said, “Not buying it.”

After systematically breaking down why he believes Beck is not really cured, Uygur busted out a theory about why Beck is really saying all of these things now: “If there’s one thing I know, I know the field of digital, online video,” he said about the business model he shares with Beck’s TheBlaze. “So he’s been going on a series of these little rants,” he said, “partly to get more attention but mainly, he’s got to get another TV contract. If he doesn’t, he’s going to go bankrupt.”

It should be noted that, despite Uygur’s theory, Forbes reported in 2013 that Beck rakes in $90 million per year and is “only getting more powerful.”

Watch video below, via The Young Turks: