Cenk Uygur To Alex Jones During Heated Interview: ‘Have You Ever Sought Mental Health Treatment?’
video

Cenk Uygur To Alex Jones During Heated Interview: ‘Have You Ever Sought Mental Health Treatment?’ 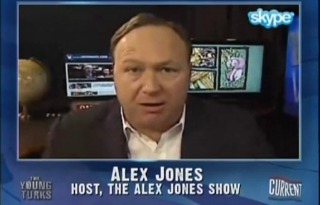 Host of The Young Turks Cenk Uygur interviewed gun advocate and conservative talk radio host Alex Jones about everything from his appearance on Piers Morgan to his views on Glenn Beck and posed a tongue-in-cheek question that may have been secretly serious: “Have you ever sought mental health treatment?”

Jones simply laughed and quipped, “America needs mental health treatment if they don’t have a pulse.” He went on to explain:

“We’re going into tyranny, we’re giving 85 billion dollars a month to foreign banks to bail out their fake derivatives that have infected our entire Social Security system – I’m angry about that.”

RELATED: CNN Panel Gets Heated Discussing Alex Jones: Why Did Piers Morgan ‘Give Him The Air Time?’

After hearing that Beck suggested he was part of the conspiracy theory to make gun advocates look bad, Jones said Beck makes him “sick.” He suggested Beck had been trying to sabotage him for years and called him “despicable.” Jones also claimed Beck had “guys watching” his news articles.

Jones continued to name-call Beck, saying he was a “piece of trash” and “bastard.” He also expressed anger that “mainline conservatives” weren’t expressing his views, because he was “original” and had “done the real research.”

Watch the clip below, via Current TV: