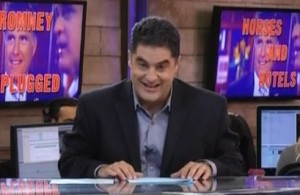 Alas, within hours came the news that Fox News had revealed the identity of the mole as O’Reilly Factor associate producer Joe Muto, and performed a quick excision.

The existence of a turncoat in the belly of the cable news behemoth was likely cause for excitement among many of the network’s detractors. Admittedly, I was as stoked as Cenk about one of Muto’s early deliveries, a narrative-reinforcing bit of video featuring Romney bantering about dressage horses with Sean Hannity. What I really loved about the clip was Hannity’s emphatic nods of agreement with Romney, which raised the equally comical possibilities that he was pretending to know what Romney was talking about, or actually does know all about dressage horses:

One detail that I missed the first time I watched it: The “Garrett” that Romney thanks for fetching him water in the second clip is Garrett Jackson, the chair-holding “body man” who’s been with Romney since his 2010 book tour.

Mainly, I enjoyed that clip because I like that kind of behind-the-scenes, unscripted stuff, but upon minimal reflection, Muto’s “work” didn’t come close to justifying his treason, nor Gawker’s exploitation of it. There have been leaks  from internal Fox sources that have had actual news value, that have served some public good, but Muto seemed only to be wallowing in sour grapes about the company that had paid him handsomely for years, and still was, to sell out his supposed beliefs.

An inside view of the Fox News crapper and some amusing outtakes from the Hannity show don’t seem to have much to do with the problems that supposedly plagued Muto’s conscience. Of all the things I’ve ever wanted to know about Fox News, their methods of achieving defecation privacy never made the list.

Gawker cleverly skirted the need for newsworthiness by making the Mole a columnist, rather than simply using him as a source, but they would have been wiser to do the latter. I’m sure the folks over at Media Matters are throwing knives at a Gawker dartboard, seething over the treasures they could have extracted from a well-managed source.

Being a whistle-blowing news source has its own set of problems, but  at least it’s something that can be done ethically. Instead, Gawker was essentially employing a thief.

Ironically, Muto complained in his introductory column that working for Fox News made it hard for him to get a job anywhere else, but his outing as a corporate turncoat has probably made him completely unemployable, except at Gawker. Hope they have a good 401k.