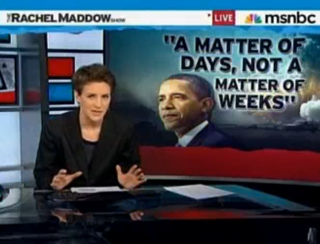 American intervention in the Libyan conflict appears to have many on all parts of the political spectrum feeling slightly queasy– after all, it is the nation’s third military front in the Middle East. But while some on the left are disappointed with President Obama’s decision to send military force there, Rachel Maddow argues that his talks with other nations and attempts to keep the Arab world at the forefront of the struggle are a sign he intends to keep his campaign promises.

“America as a country fights a lot of wars,” Maddow explained at the beginning of the segment, playing a montage of Oval Office speeches by Reagan, Clinton, and Bush announcing wars (“and those are just the ones they announced”). The significance of the profound Oval Office talk struck Maddow particularly– it’s a speech President Obama has yet to give, and this, she argues, was a deliberate choice. “He pointedly declined to do that in a way that presidents usually do,” she notes. While most presidents campaign on policies of peace– particularly jarring is footage of Governor George W. Bush proposing a “humble” foreign policy– President Obama, Maddow concludes, is giving it a shot: “The difference with Mr. Obama as president is that he appears to be walking more of that walk than just talking the talk.”

His talks with the United Nations and wait for “a clear international consensus” differ starkly from some of the more aggressive work Americans have seen from their presidents in the past. “The fact that he’s actually doing it as president is freaking out all corners of the political world that kind of liked the chest-thumping,” Maddow concludes. The idea behind President Obama’s insistence on talking to other nations, Maddow notes, is to “change the narrative.” “Do you want the narrative of America’s role in the world to be ‘America leads Western aggression against Arab countries?” she asks rhetorically. “President Obama wants the narrative to be something different” by showing reluctance to partake in the struggle, she continues. “H wants everybody to know how reluctant he was,” she concludes, while “trying to force to the forefront the Arab world.”

While Maddow neglects to mention the seemingly minor role Congress has taken in this intervention, few would be hard-pressed to disagree that President Obama is attempting to unite as many countries as possible behind military action before taking it– that France took the first step in entering Libyan airspace speaks for itself. Whether the strategy is wise or not, on the other hand, is a far deeper point of contention.