Character Tissues: Does Mitt Romney Have Right To Cry About ‘Character Assassination?’
video

Character Tissues: Does Mitt Romney Have Right To Cry About ‘Character Assassination?’ 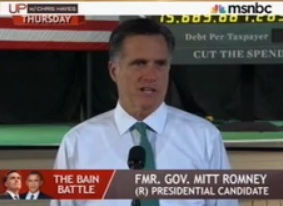 On Sunday morning’s Up with Chris Hayes, host Chris Hayes led off with the umpteenth cable news discussion of the Obama campaign’s assault on Mitt Romney‘s record at Bain Capital, and Romney’s attempt to draw a “character assassination” foul over it. Hayes and panel raised interesting questions about whether Team Obama’s courtship of private equity donors amounts to hypocrisy, and whether Romney’s Bain record is an indicator of how he would govern, among others.

According to Hayes, “staging this kind of assault on romney’s financier past is a delicate proposition” because President Obama “is trying to paint Romney as an unfeeling corporate raider, while raising millions of dollars from these same financiers these attacks demonize.”

He mentions a fundraiser held at the home of Blackstone Group president Tony James, and top Obama bundler Jonathan Lavine, currently a managing director at Bain.

This hypocrisy argument, however, seems to rely on the notion that you should only accept money from people whom you think should be running the country. You can take donations from plumbers, yet still think a plumber isn’t qualified to be president. If anything, President Obama’s private equity donors could be seen as an indictment of Romney, who is clearly better for their narrow interests, yet can’t gain their unanimous support.

The Washington Post’s Ezra Klein opined that “in the Bain discussion, both sides have managed to say nothing interesting.”

Klein noted that when Romney was Governor of Massachusetts, he “did some big social policy, particularly the Romneycare bill.”

But Hayes pointed out that Romney’s “entire tenure as Massachusetts governor is totally erased from his record,” which is why I think Klein is wrong. If Mitt Romney says his record at Bain is what voters should base their decisions on, we should take him at his word.

One thing I love about this clip is how, about a minute in, Hayes pulls a reverse-Pawlenty and barely stops himself from calling the President “Obamney”: (watch the full segment here)

There’s been a lot of talk about Romney’s response to the Obama campaign’s Bain attacks, which he repeatedly called “character assassination,” and equated with the scuttled Joe Ricketts plan to sic an “extremely literate conservative African-American” on President Obama (“extremely literate?” Like what, a guy who snowboards while reading Dostoyevsky?).

One thing that’s been missing from the discussion of this back-and-forth is the distinction between “character assassination” and attacking someone’s character. While I would disagree with Romney that the Bain attack, among others leveled by the Obama campaign, constitute “character assassination,” I’ve heard a lot of cable news analysts (particularly liberals) say that these attacks have nothing to do with character. Both of these ideas are wrong.

“Character assassination” is a subset of character attacks, differentiated by dishonesty and/or unfairness. Obviously, it is fair to examine Romney’s record at Bain, because Romney has made that his one and only sales pitch. Even as Steve Rattner tried to call the Obama ad unfair, he couldn’t help but point out that it was Mitt Romney who made the claim that his experience at Bain made him a job creator, when that’s really not the point of private equity at all.

Had Romney never made that specific claim, then I’d say it would be unfair for the Obama campaign to single out Bain failures, and represent them as characteristic of everything Romney did there (only to the extent that’s what all political ads do, present only information that supports a given conclusion).

However, let’s not pretend that this line of attack is not about Mitt Romney’s character. Romney’s bogus claims of job creation certainly gave the campaign an opening, but the emotional tales from people thrown out of work at GST Steel are clearly designed to “paint Romney as an unfeeling corporate raider,” as Hayes said, but also to fit into a broader narrative about Romney’s character.

Even way back when Mitt Romney was perpetual runner-up to a carousel of increasingly ridiculous GOP frontrunners, senior Obama adviser David Axelrod drew the template for this campaign by saying that “campaigns are like an MRI for the soul,” which is about as deep a reference as you can get to someone’s character. The Obama campaign, along with pro-Obama SuperPAC Priorities USA Action, has worked that narrative like a chain gang since then.

Indeed, almost every attack leveled by Team Obama has dealt with Romney’s character; has concluded with the unsaid question “Who does that?”

However, if the Obama campaign is guilty of picking at Romney’s character scabs, theirs is a petty misdemeanor compared to the mainstream media, who obsessively chronicle (or “report,” if you prefer) every dissonant move Romney makes, from putting his dog on the roof of his car, to defending putting his dog on the roof of the car. The message is clearly “what the hell is wrong with this guy?”

Now, I can understand a Romney supporter being unhappy with the relentlessness of it all, and there’s certainly a worthy discussion to be had over how important this sort of intangible quality should be in an election, but what I haven’t seen is anyone stepping up to say “Hey, strapping your dog to the roof of your car is totally normal. Telling a joke about shutting down a factory is a fine strategy for a campaign speech. And y’know what? A dead straight parent really is better than a live gay one.”

Far more important than whether Romney acts like he’s running to defeat our Earth-leader is whether he knows how to govern humans. On that count, Romney’s Bain experience is revealing, because as Hayes said, “in the private sector, you have a specific goal, you have one interest you’re keeping in mind: the financial health of your shareholders.”

The question voters need to answer is, if elected, who will be Mitt Romney’s shareholders?