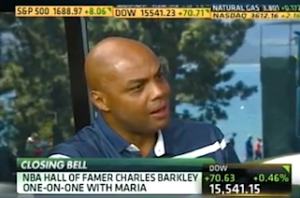 NBA legend Charles Barkley appeared on CNBC’s Closing Bell with Maria Bartiromo Thursday afternoon and shared his incredibly diplomatic views on George Zimmerman‘s acquittal. “I agree with the verdict,” Barkley told Bartiromo. “I’m sorry that young kid got killed, but they didn’t have enough evidence to charge him.”

Barkley admitted that he did see some “racial profiling” in the case, but said “something happened that changed the dynamic that night.” He recognized what he was saying was “probably not a popular opinion among most people,” but “looking at the evidence” he said he agreed with the jury’s decision.

Despite Zimmerman’s “racial profiling,” in Barkley’s assessment, “Trayvon Martin, God rest his soul, he did flip the switch and start beating the hell out of Mr. Zimmerman.” He added that he “feels bad” that the trial gave “every white person and black person who is racist the platform to vent their ignorance. That’s the thing that bothered me the most. I watched this trial closely. I watched these people on television talking about it. A lot of these people have a hidden agenda. They want to have their racist views, whether they are white or black… They’re biases come out.”