Charles Krauthammer: After Market Crash, Some Liberals May Be Thinking ‘It Should’ve Been Hillary’ 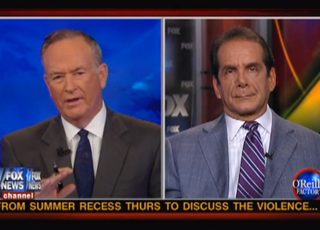 Charles Krauthammer believes those on the left that do not buy the idea that a series of unfortunate, unavoidable events led to the current crisis situation in America may be reconsidering nominating President Obama as the Democratic presidential candidate. This was his conclusion tonight on The O’Reilly Factor, where host Bill O’Reilly asked Krauthammer to assess what “editors of the New York Times, NBC,” and other allegedly liberal strongholds were currently feeling towards the president.

O’Reilly began the discussion noting comments by Rep. Barney Frank about the current state of the economy and the need to keep the debt under control. Krauthammer noted of his comments that there was nothing new in a Democrat wanting to reduce defense spending, as Democrats tend to suggest that “whenever you need money, you take it away from the one essential function of government.” He noted that defense spending was actually far lower than in past decades, however, citing the fact that the Kennedy administration was attributing half of its expenditures to defense– far more than today– but that cutting defense, especially in Asia, would mean “giving up the Pacific rim to China.”

O’Reilly then noted that Fox News was the only cable news channel to get better ratings during the breaking of the downgrade news, and argued this was a sign that “even liberal viewers” no longer trust the liberal media. To that end, he asked Krauthammer for some “speculation– you’re good at this” on what they were thinking as the distrust grew. “What are they saying to themselves?”

“Some of them are saying to themselves,” Krauthammer argued, “‘We just picked the wrong candidate, maybe it should’ve been Hillary [Clinton].'” He noted that this allowed them to continue to think that “it isn’t that liberalism is wrong, but we just have a lousy leader… gave a good speech, but never ran a candy store.” Those that were still loyal, he posited, believed “it is all the fault either of acts of God… or, of course, of those nasty terrible Republicans who held America hostage, held a gun to its head.” With that kind of split, Krauthammer predicted, “if the election were held tomorrow, they would be destroyed.”