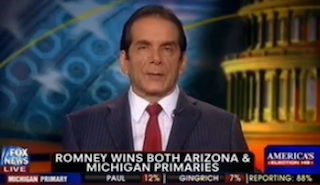 In the immediate aftermath of Rick Santorum‘s election night defeat in both Arizona and Michigan, Fox News contributor Charles Krauthammer said the candidate, for the most part, had no one to blame but himself, calling Santorum’s failure “self-inflicted.”

“I think Santorum really had his shot here, he got the slingshot coming out of that three-win…and he came really close, which would have been a tremendous upset and victory, but he fell short. And like the others, I think it was mostly self-inflicted.”

“The story here is Romney’s luck in his choice of opponents,” Krauthammer explained. “Santorum, if you look at the exit polls, he had a seven percent edge on those who decided in the last few days. But among those who decided in the last few weeks, he had been up twenty, which means his momentum really slowed in the end. That had to do, I think, with self-inflicted errors. There was Kennedy, college and contraception.”

The conservative columnist thought, above all else, Santorum’s loss came down to those three factors.

“You know that attack on Kennedy, the speech he made in 1960 on religion, and Santorum said it made him want to throw up. He talked about college, the fact that he said Obama was trying to push it for everyone that reflected elitism, snobbery, and indoctrination. There’s a point there about liberal higher education but it was extreme and overstated,” Krauthammer continued. “And on contraception, an issue which has been decided, settled in the country a half century ago, he’s on the wrong side of that. And you saw that in the women’s vote! Santorum came dead even on the men vote. And the women’s vote he lost by 5% and that’s what cost him the election. And I think you saw that reflected in the speech he made. What did he talk about? His mother, his wife, and his daughter, and he spoke about them as independent and professional trying to undo the damage he had done in the gender gap. So I think that remains the story. Santorum had his shot. He will have one more shot I think in Ohio. but again, Romney, slow, steady, unspectacular, is the one who sort of remains standing when all the wind blows away and the sand disappears.”