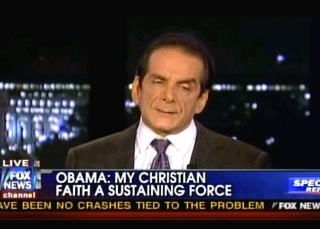 More than two years of President Obama being in power, a good number of Americans have no idea what his religious background is– a plurality admitting they have no idea, while an alarming number suggesting he is Muslim. This despite the President discussing his religion publicly and make clear that he is a Christian. Even this latter action, however, seems to be irking some conservatives, like Charles Krauthammer, who considered his recent trips to church “ostentatious” and “somewhat distasteful.”

A recent Pew poll showed that a whole 42% of Americans weren’t sure what the President’s religious background was, this despite open declarations of Christianity from the Obama family. Tonight’s Special Report did not seem to object to the idea of a president having strong religious beliefs, but Krauthammer in particular was skeptical of the President’s latest appearances in church, and found it somewhat problematic for the President to claim that said appearances were genuine. He particularly objected to the appearance that “there is no connection whatsoever between his late and recent ostentatious shows of religiosity, on the other hand, [and] the polls that show on the other hand that only a third of Americans think he’s a Christian. Clearly, he’s acting as a politician.” Krauthammer continued to argue that he did not “begrudge” the President that strategy, but nonetheless found it “somewhat distasteful” on a personal level– “God is not particularly pleased with public shows of religiosity.”

The panel did not unanimously agree, though there was little dissent on the point that President Obama’s religious displays were politically motivated. Stephen Hayes, particularly, agreed with the premise that the Pew poll was behind his latest religious declarations– pointing out that he actually found the level of religion coming out of the President lately quite minimal, having expected “that he would be going to church every day” and “carrying the Bible” everywhere. Unlike Krauthammer, however, Hayes didn’t “have a problem with him… if a public official wants to talk about religion, if it’s what drives his thinking. “I think there’s absolutely nothing wrong,” he concluded. He did not succeed in convincing Krauthammer.