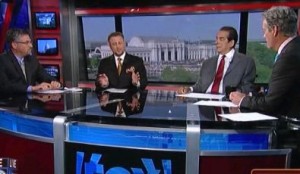 On Fox News earlier today, John Roberts conducted a panel discussion on the economy and, more importantly, the fight President Obama and Mitt Romney are having over it. However, the panelists didn’t feel like Romney was doing enough to counter Obama, with Charles Krauthammer declaring that if Romney can’t properly articulate the right arguments against Obama, he doesn’t deserve to win the election.

RELATED: Mitt Romney On June Jobs Report, ObamaCare: ‘By The Way, The Proof Is That I Was Right’

The panel first discussed the sluggish jobs numbers released today, saying they’re certainly not the kind of numbers that would give President Obama a reasonable bump. Roll Call’s David Drucker noted that perception is always key, and that no matter what the numbers say, people need to feel like the economy is getting better. Drucker concluded that Obama’s best strategy, given today’s lacking news, is to “disqualify” Romney for the presidency.

Roberts acknowledged that Romney had a strong response to the numbers today, overall the Republican candidate has not been able to get the kind of traction on the economy that he needs. Krauthammer said that while people consider the economy to be a number one priority, Romney’s messaging has not exactly been that strong, and he has not come up with an effective means of rebutting Obama campaign ads linking Romney and Bain Capital to outsourcing jobs.

“Romney’s inability to bring home the argument… is simply incomprehensible. If he can’t make the argument, he doesn’t deserve to win the election.”

Steve Hayes suggested Romney should have a much “broader” economic argument, to address issues, like health care and entitlement reform, that have not gotten that much attention over the course of the campaign. Drucker made the point that all of the criticisms both candidates are getting are somewhat premature, given that it’s the middle of summer right now and the campaign only starts to get more heated and grab more attention in the post-convention fall. Roberts added that this is the time for candidates to define themselves before they hit the home stretch.

Roberts then brought up two recent mentions on the campaign trail of past presidents, with David Axelrod comparing the level of secrecy in the Romney campaign to Richard Nixon‘s administration and Romney comparing Obama to Jimmy Carter. Krauthammer dismissed Axelrod’s claims as not only ridiculous but hypocritical, considering the scrutiny the Obama administration has faced recently over secrecy in the midst of the Fast & Furious investigation.

But as for Romney’s biggest problem, Krauthammer stated that the Republican candidate just “hasn’t been ideological enough.” He said that Romney hasn’t had any “charismatic speeches” criticizing the Obama administration in a way that many conservatives would want him to. Hayes added that Romney needs to be more aggressive in going after the president.