Charles Krauthammer: In Order To Win, GOP Needs ‘A Candidate Who Is As Generic As Possible’
video

Charles Krauthammer: In Order To Win, GOP Needs ‘A Candidate Who Is As Generic As Possible’ 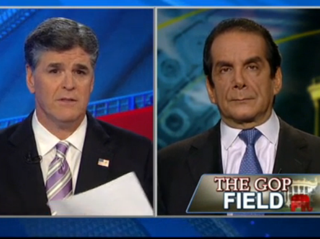 While conventional wisdom on the right for the 2012 elections is that President Obama’s record on the economy is so bad that it wouldn’t take much to topple him, Charles Krauthammer warned against a false sense of security on Hannity tonight. Arguing that “generic Republican” was the only candidate consistently beating the President in polls, he warned against highlighting the “character, or the history, or the ideas” of any Republican.

RELATED: Krauthammer: Trump Debate Where ‘Moderator Chooses A Nominee Afterward’ Is A ‘Joke’

Krauthammer began his segment agreeing with Sean Hannity that the President had a “European socialist’ philosophy that was “not native to America… and I don’t think it works.” He disagreed in addition with the “social safety net, or an entitlement state” that the Democrats were building, but believed that “there’s sort of a bedrock sense in America, a common sense understanding of what holds society together” that diminished the President’s ideas as Krauthammer understood them.”

On policies, Hannity argued that “Obama is weaker than all the Republicans,” a premise that Krauthammer agreed with, but not in an electoral sense. “We’re underestimating Obama’s ability to win,” he argued, initially understanding Hannity to mean “weak” in a voter support sense. “If next year is a referendum on Obama, he is done,” Krauthammer assured Hannity, though adding that “if the issue is the character, or the history, or the ideas, or the lapses, or anything about the Republican, to whatever extent it is, that diminishes from the weakness of Obama and the fact that if it’s a referendum on him, he loses.”

He concluded by suggesting that the 2012 presidential election will be the “dirtiest campaign in American history.”