Charles Krauthammer is Being Properly Mourned Now, But Here is Where He Will Really Be Missed
Opinion

Charles Krauthammer is Being Properly Mourned Now, But Here is Where He Will Really Be Missed 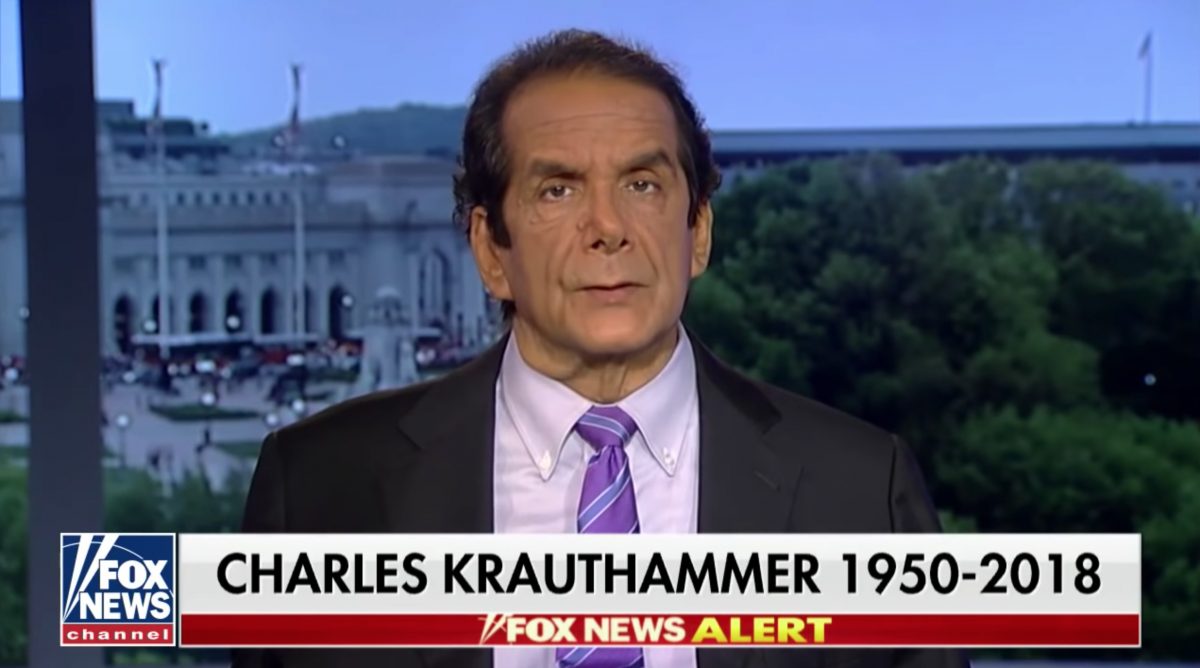 As he had predicted in his heartbreaking farewell message of two weeks ago, conservative commentator Charles Krauthammer passed away yesterday. He was an important part of the conservative movement, and lived an extraordinary life, one which deserves to be remembered for many years to come.

Fox News, where he became well-known nationally for his always intellectually vibrant and often biting analysis, has done an excellent job eulogizing Krauthammer. Bret Baier, the host of the show with which Krauthammer was most closely associated, even pledged that his “legacy will live on here.”

As a former avid watcher of Fox News who can barely stomach even a few minutes of it now that most of the network has effectively become President Donald Trump’s own state-run media outlet, I was very curious to see how they would handle Krauthammer’s death. This was especially so since he was a harsh critic of Trump, once even dismissing him as a “rodeo clown” during the 2016 primaries, an act of disobedience which might have gotten him banned from the network after Trump became president.

I got the sense from the Krauthammer tributes that Fox News, whether they realized it or not, wasn’t just doing an obituary for a treasured colleague, but for pre-Trump version of the network itself. The timing of Krauthammer’s passing simply couldn’t be more symbolic of something larger than even he was.

Even though I thought it somewhat hypocritical for certain Fox News personalities to be roundly praising a man whom they likely would have publicly rejected had he been healthy enough to provide strong anti-Trump commentary for the past year when he was off the air, I am glad that the loss of Krauthammer is being properly grieved. It is one thing to be mourned, however, and another to be missed.

My mind almost immediately turned the moment that I am quite certain that many people like myself, and perhaps, indirectly, the nation as a whole, is likely going to first miss Charles Krauthammer very badly. I am referring to when Robert Mueller comes forward with the final findings of his investigation into Russian meddling in the 2016 election.

I have slowly come to accept that it is increasingly likely Trump is guilty of something very serious, but also gradually more probable that the “conservative” base and the Republican leadership will ignore this reality, regardless of the evidence, while fighting to the death to defend him. Consequently, it is my belief that the only real hope for justice to be done here, assuming Trump really is guilty of a legitimate crime, is for there to somehow be a significant break in the pro-Trump dam at Fox News.

Charles Krauthammer was the only person who could have theoretically created that first fracture. Conversely, he was also one of the very few people to whom someone like me would listen very carefully if he came out supporting Trump after the results of the investigation were known.

Krauthammer had several attributes which no one at Fox News still possesses which would have given his view of Muller’s findings, like a home plate umpire in the game he loved most, enormous influence. His intellect, gravitas, and inspiring personal story earned him universal respect across the political and media spectrums and, perhaps just as importantly, made him virtually untouchable at Fox News.

Only Krauthammer would have had the moral authority and gumption to buck what will certainly be the overwhelming conclusion by the commentators at Fox News that Trump was either exonerated or railroaded by Mueller. Perhaps just as importantly, Krauthammer’s conclusions might have had an impact on others at the network. Now, the most likely scenario is that there will be no strong voices dissenting from whatever Trump tells Sean Hannity the narrative should be, thus making it easier for everyone else to simply fall in line.

Brit Hume would have once been expected to perform a similar role to the one Krauthammer might have played, but his total sellout to Trump has been perhaps the most stunning and depressing of any conservative media star (he recently blocked me on twitter for rather benignly comparing his defense of Trump to that of an O.J. Simpson defense attorney). Judge Andrew Napolitano has pleasantly shocked me with his willingness to stand up against the “Deep State” lies intended to discredit Mueller, but he lacks the esteem and job security which would be needed to really make a difference.

As for Brett Baier, Chris Wallace, and Shepard Smith, they all show signs of still having a conscience, though theirs seem to be struggling to find oxygen amidst the toxic state-run atmosphere at the network. My guess is that all three of them will mostly hide behind the need to be an “objective news anchor” if the evidence turns out poorly for Trump.

After all, the number one priority of most stars in this business is to do everything you can to protect your cushy gig. There just aren’t many good ones out there like being a prominent anchor at Fox News, and protecting the legacy of a dead man is unlikely to be worth the risk of being forced to find that out first hand.

Rest in peace Charles Krauthammer. We are going to miss you more than you could have possibly known.