Charles Krauthammer: Obama Is ‘Pathetic’ For ‘Going Around Whining’ About ‘Bad Luck’ 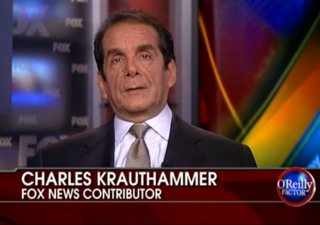 President Obama is facing plenty of questions from constituents as he travels the Midwest on his jobs bus tour this week, and in answering for the current state of the economy seems to have mentioned everything from the economic impact of the Japanese earthquake and tsunami in March to simple “bad luck.” Needless to say, conservatives aren’t buying it. On last night’s O’Reilly Factor, Charles Krauthammer blasted the President, calling him, among other things, “pathetic,” and calling his claims against Republicans “ironic, hypocritical, [and] offensive.”

Krauthammer analyzed the President’s statements with host Monica Crowley, arguing that his “bad luck” claims were “rather pathetic,” and that Americans didn’t elect a President “to go around whining and complaining about events– dealing with events is what a leader does.” What’s more, he argued the saying “luck is the residue of design” was applicable, as the President had a “very specific design for the American economy.”

Krauthammer then broke down the President’s plan for the future: “all of the accusations, all of the charges, all of the excuses,” he predicted, would fall into two categories: “bad luck and bad faith,” the latter by the Republicans. This charge, that Republicans were trying to court votes rather than fix the economy, he found particularly “ironic, hypocritical, offensive” because “you should at least credit the other side with principles and ideas,” which he admitted to doing with the left. He continued: “not only is it a vile charge, but a laughable one,” because Republicans had spent political capital on trying to reform programs that could have ended their political careers.