Charles Krauthammer On Donald Trump: ‘The Vulgarity Of Him Is Offensive’ 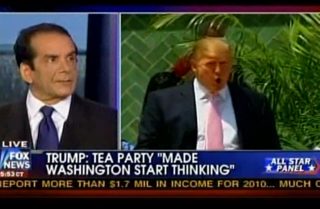 Donald Trump‘s monopolization of the news cycle is starting to peeve a number of high-profile conservatives, his run going from entertaining to concerning in about a week’s time. On Friday, he was called a joke by Karl Rove, and today it was Charles Krauthammer‘s turn at bat. Calling him a “provocateur and clown, unserious,” Krauthammer predicted Trump would indeed be running in 2012, and in the process would devastate the Republican Party.

On Bret Baier‘s “All Star Panel” tonight, Krauthammer picked Mississippi governor Haley Barbour as his favorite, and “the only serious one” currently in the playing field on the Republican side. He took a moment to note that he could not imagine Sarah Palin or Rep. Michele Bachmann doing too well (though gave Bachmann more of a chance in Iowa), and then reluctantly addressed Trump. Comparing him to Al Sharpton, Krauthammer predicted that Trump would “be up in the debate” and definitely run, which would result in him attempting to “monopolize the discussion, draw it away to issues that are irrelevant.” Knowing Trump’s popularity, he then instructed potential hate-mailers to send the letters to him, “not to Bret, he’s not responsible.” He also noted with disgust that “the vulgarity of him is offensive,” particularly about his money.

The other panelists didn’t partake in the Trump bashing with the same type of zeal (Fred Barnes actually called the entire Republican presidential field “irrelevant”), though Juan Williams did complement Krauthammer: “‘the vulgarity of him… I thought that was poetic in a way.”