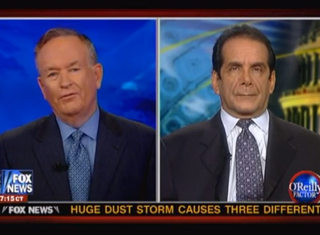 With the news finally subsiding– yet again– that New Jersey Governor Chris Christie is definitely not a 2012 contender, Bill O’Reilly and Charles Krauthammer took a look at the Republican landscape as it now exists. With Mitt Romney as what Krauthammer denoted “the slow and steady tortoise,” this made it Rick Perry‘s move to scramble back up the polls. With that in mind, O’Reilly wondered why Perry seemed to be avoiding the cameras, something that to Krauthammer indicated Perry was afraid of having a “Katie Couric moment.”

Krauthammer handicapped the field on tonight’s O’Reilly Factor and found that the odds were in Romney’s favor, but that it was Rep. Michele Bachmann who hit on why the polls had been so volatile for this election: “this time, we don’t want to settle.” That makes characters like Herman Cain all the more alluring for being an outsider, though, as Krauthammer explained, “the last time we elected someone outside the system, it was Eisenhouwer, and all he did was win World War II.”

With the field being what it is, O’Reilly wondered why Perry hadn’t made an attempt to expose himself more to people through the press. “I know time is running out for him,” O’Reilly warned, and being on the sidelines seemed to him unwise. To Krauthammer, it was probably the best thing he could do. “He thinks he’ll blow it,” he explained, “he thinks he’ll have a Katie Couric interview.” If he did blow the interview, Krauthammer noted that he would be “completely dead,” so staying out as long as he can and training for debates would be a good call. “I’m not sure he wants to accelerate the timetable before he has to step out again,” he advised.