Charles Krauthammer Questions Whether Herman Cain Knows Where Libya Is 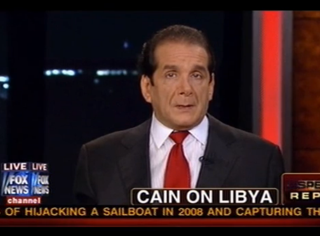 Herman Cain‘s uncomfortable Libya gaffe is certainly not doing much to elevate Charles Krauthammer‘s confidence in him. Krauthammer, who had already told host Bret Baier previously that he had a feeling Cain was “winging it,” repeated his suspicions tonight, adding that he didn’t understand “what there was that required almost a minute of thought gathering” in the question that stumped him.

“That’s not a gotcha question,” Krauthammer told Baier about the question Cain couldn’t answer without much thought: whether he agreed with the way President Obama handled the Libya situation. Noting that he was “surprised” Cain was still a frontrunner after this, it made it all the more apparent that “he is over his head– he’s wining it.” It didn’t help after Saturday’s debate, he continued, calling that a “dismal performance.”

Turning, then, back to the Libya question, Krauthammer marveled at the simplicity of the question compared to the response. “What exactly was it about Libya that he had to gather his thoughts on?” he asked. “It looked as if he either didn’t know where it was, or what country it was, or perhaps how the war turned out, or what Obama’s policy was– I’m not sure what there was that required almost a minute of thought gathering.”