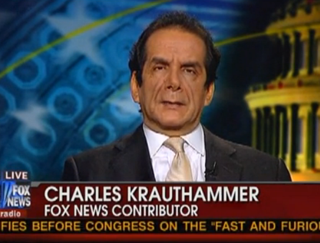 With the possibility of making it to a primary increasingly slim for Herman Cain as he faces a number of sexual harassment accusations, Charles Krauthammer visited Bill O’Reilly tonight to give a review of his press conference. Krauthammer was impressed with Cain’s “high wire act” but warned him that he had made one mistake that had surfaced before– accusing the Democrats of having something to do with the story surfacing, after his chief of staff previously accused the Perry campaign of the same.

Krauthammer noted that he did believe Cain could survive, “but it won’t be easy.” In today’s “high wire act,” Krauthammer argued Cain “crossed a wire just about intact,” but for him to “blindly blame it on the Democratic machine” did him no good: “you can’t go around making charges if you don’t know they’re true or not.”

O’Reilly agreed, noting there was a lot against Cain, including CNN (which he called “the Cain Network now over there”) and the establishment Republicans, who “weren’t on his side to begin with.” Despite that, Krauthammer argued, “the establishment Republicans aren’t behind this,” and warned Cain should “stop throwing out accusations.” He also advised voters to keep the presumption of innocence, though O’Reilly didn’t believe this was possible: “we live in a country where judgments are based on nothing and people are destroyed,” he concluded.