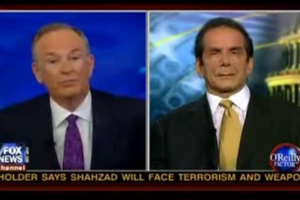 Washington Post columnist and Fox News contributor Charles Krauthammer has developed a strong following on the right for his measured opposition to Obama administration policy, but on tonight’s O’Reilly Factor, he came out in support of a path to citizenship for illegal immigrants already residing in this country– as long as the border is “95%” secure.

Bill O’Reilly and Krauthammer had debated the issue before; last time, Krauthammer opposed using the military to stop the problem while O’Reilly justified it by declaring illegal immigration an “invasion.” O’Reilly was similarly uncomfortable with Krauthammer’s proposal to assimilate illegal immigrants once a sturdy fence was built this time around, though Krauthammer insisted on English and civics classes and fines for the offenders and a zero-tolerance policy with illegal immigrants having a criminal past. His reason for punishing but keeping illegal immigrants two-fold: practical and humanitarian, and he refused to have anything remotely resembling amnesty instituted until it was near impossible to cross the border illegally:

“Once you secure the border– I think this a humane country, we understand that these are not evil people, but they broke our laws, but they jumped the line unfairly. There are others all around the world who have waited years and years and years to enter legally, so they are going to have to go through a process… the reason that everybody resists legalization is not just that it is unfair, it’s that as long as the border is open, its an invitation to another ten or twenty million.”

While O’Reilly ceded the practicality issue, he insisted that removing illegal immigrants currently living here was necessary on principle. He also took issue with Krauthammer’s proposal to close the border without using the National Guard, which he considered unlikely to be successful. Video below: