Charlie Hebdo Staff Previews New Issue: ‘We Will Try to Speak with Joy’ 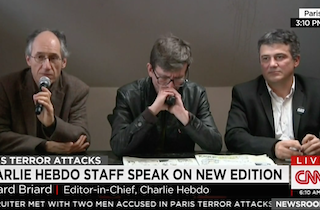 With three million copies of new issue due hitting the stands tomorrow, one week after the terrorist attack at their office that left a dozen people dead, the remaining staff of French satirical magazine Charlie Hebdo confirmed to the press Tuesday morning that the magazine would publish on undeterred.

“I will try to speak about this new edition with joy,” said editor-in-chief Gerard Briard through a translator, “because we are happy to have managed it.”

He added that when cartoonist Ronald Luzier showed them the cover, “they jumped up with joy.”

Luzier then discussed in detail the challenge of making the new issue after the attacks.

It was my honor to subscribe, @Charlie_Hebdo_. Now I can’t wait to see how you draw me – I know you won’t hold back.