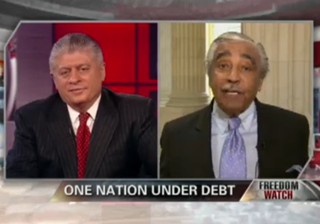 Freedom Watch, Judge Andrew Napolitano‘s libertarian haven over on Fox Business, usually entertains guests of the small government persuasion on anything from bringing the troops home to eliminating the income tax. So when notoriously liberal Rep. Charlie Rangel stepped up to propose an end to the Bush Tax Cuts and raising the debt ceiling, he came into it a fish out of water, to put it mildly.

Judge Napolitano and Rep. Rangel (who projected an air of chumminess only old friends could muster) had at it from the get-go, with Rep. Rangel teasing that Judge Napolitano’s beliefs were a part of his newfound success as a TV host– “when you were on a judge’s salary you weren’t talking this way!” But Rep. Rangel lasted a short time without going into the details of the Bush tax cuts, which he argued repealing would not raise taxes but, rather return them to their normal state. “We are not talking about a new tax hike,” Rep. Rangel noted, “We had an extension that dramatically lowered taxes… and the only thing the President is talking about is returning to the old tax rates.” He also made the claim that taxes are currently at their lowest rates “since the beginning of the Republic,” which was probably not intended to be a factual statement (Judge Napolitano pounced on that immediately, noting that “for the first hundred years there was no income tax”).

Judge Napolitano then shifted to the more practical issues facing Congress, asking whether “any tax raise is dead on arrival in this House of Representatives, right?” Rep. Rangel responded arguing that many conservatives were more interested in helping the needy, “with all the spiritual leaders and the rabbis and the ministers, they will not be nearly concerned with the rich protecting their money in havens overseas as they will be concerned about our poor and our sick and our vulnerable.” Um, okay.

Rep. Rangel’s obstacle course concluded with having to defend raising the debt ceiling, to which the best he could retort was that the money was necessary to “pay the interest on money that has already been borrowed,” and that not paying that money was detrimental not only to American economies but all foreign economies that depend on it. Not exactly the most persuasive argument to the average Freedom Watch viewer, one can expect, but certainly a noble effort on contentious ground.