Charlie Rangel To Judge Napolitano On Debt Limit: ‘It’s A Great Government, Why Not Be Big?’ 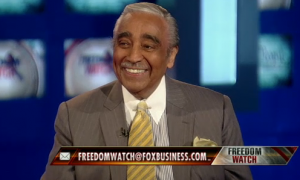 Democratic Congressman Charlie Rangel appeared with Judge Andrew Napolitano last night and they respectfully disagreed with one another on the issue of whether the government should be able to tax and spend more money. Yet surprisingly, they found common ground on a different issue, as they both agreed that the President, no matter their political affiliation, should not be able to send troops overseas without first obtaining a declaration of war from Congress.

Rangel argues “the reason why Congress allows it to happen is because their constituents aren’t making any sacrifice” and that instituting a national draft would force the country to be more serious and more reluctant about any decision regarding the troops. Napolitano responds that a draft isn’t necessary when Congress merely needs to stand up and defend their already existing constitutional authority. Rangle persisted though, believing that “everybody should give our government a couple years of public service.” The Judge quickly dismissed the idea as a “form of slavery.”

Finally Napolitano was upset that no President seems to be able to live within their economic means, and could not understand the rationale behind voting to borrow more money in the future. Rangel made a valiant attempt to convince the Judge, which prompted Napolitano to tell “big government” Rangel, “I commend you for the force with which you defend that nonsense.” Rangel laughed and responded, “it’s a great government, why not be big?”