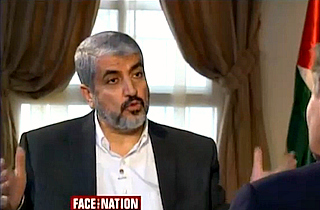 CBS News’ Charlie Rose interviewed Khaled Meshaal for Face the Nation Sunday morning, and attempted to corner him as to whether the Palestinians would recognize Israel’s right to exist as a Jewish state provided it was not occupying the Palestinian territories.

Meshaal had initially said, “We are not fanatics. We are not fundamentalists. We do not, actually, fight the Jews because they are Jews per se. We fight the occupiers.”

More of Rose’s interview will be aired tomorrow on CBS This Morning.